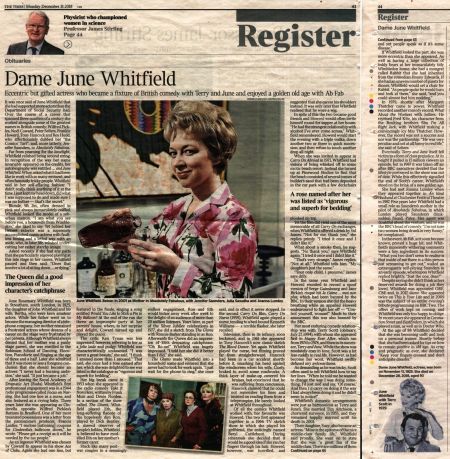 It was once said of June Whitfield that she had supported more actors than the Department of Social Security had. Over the course of a career that spanned three quarters of a century she worked alongside some of the greatest names in British comedy: Wilfred Pickles, Noel Coward, Peter Sellers, Frankie Howerd, Tony Hancock and Roy Hudd, who affectionately dubbed her "the Comics' Tart", and, more latterly, Jennifer Saunders, in Absolutely Fabulous.

Far from yearning for the limelight, Whitfield relished being second string. In recognition of the way her name invariably appeared on the credits, her autobiography was entitled ... and June Whitfield. When asked what it had been like to work with so many eminent, and often famously tricky people. Whitfield said in her self-effacing fashion: 1 didn't really think anything of it at the time. I just kept my head down, did what I was supposed to do and made sure I was no bother — that's the secret."

Blonde, 5ft 2in, often dressed in pink and always immaculately coiffed, Whitfield looked the model of a suburban matron. "I am what you see before you, a housewife from Wimbledon: she liked to say. Yet behind her twinset exterior was a supremely accomplished comic actress with faultless timing and a lethal way with an aside, who, in later life, relished undercutting her rather starchy image.

Asked recently if she had any parts that she particularly enjoyed playing at this late stage in her career, Whitfield paused and then said: "Ones that involve a lot of sitting down ... or dying."

June Rosemary Whitfield was born in Streatham, south London, in 1925, the daughter of John Whitfield and his wife, Bertha, who were keen amateur actors. While her father went on to become the managing director of a telephone company, her mother remained a frustrated actress whose dreams of a career on the stage were frustrated by her parents. Although Whitfield always denied that her mother was a pushy stage parent. she was enrolled in the Robinson School of Dancing, Elocution, Pianoforte and Singing at the age of three and a half. Later she admitted that it was more or less a foregone conclusion that she should become an actress: "I never had a burning ambition: she said. "It just became a job."

After leaving the Royal Academy of Dramatic Art (Rada) Whitfield's first professional engagement was in a 1944 radio programme called Focus on Nursing. She had one line as a nurse, and also featured as a crying baby. Three years later she was appearing as Cinderella opposite Wilfred Pickles's Buttons in Bradford. One of her most treasured possessions was a letter from the pantomime's producer, Francis Laidler. "I enclose [rationing] coupons for Cinderella's ballroom shoes, he wrote. "Please get a receipt as it will be needed by the tax people."

As an ingenue Whitfield was chosen by Coward to appear in his show Ace of Clubs. Again she had one line, but featured in the finale, singing a song entitled Would You Like to Stick a Pin in My Balloon? At the end of the run she threw an impromptu party at her parents' house, where, to her surprise and delight, Coward turned up and played the piano.

The critic Ken Tynan was less impressed, however, referring to her as a jolie laide and pudgy. Whitfield was characteristically undaunted. "I was never a great beauty: she said. "I think I amused more than I aroused: That said, she once had a rose named after her, which she was delighted to see was listed in the catalogue as "vigorous and superb for bedding".

Her big break came in 1953 when she appeared in the radio comedy Take It from Here, written by Frank Muir and Denis Norden. In a section of the show called The Glums, Whitfield played Eth, the long-suffering fiancee of the hopelessly dim Ron. played by Dick Bentley. A shrewd observer of people's foibles, Whitfield is believed to have modelled Eth on her mother's former carer.

Stuck like many post-war couples in a seemingly endless engagement, Ron and Eth would bicker away week after week to the delight of an audience of more than 20 million listeners. Years later, as part of the Silver Jubilee celebrations in 1977, she did a sketch from The Glums with Ronnie Barker standing in as Ron. Afterwards the Queen did an impression of Eth's despairing catchphrase, "Oh Ro-on!" Whitfield was hugely impressed. "l told her she did it better than l did: she said.

The Glums made Whitfield into a household name and ensured that she never had to look for work again. "I just wait for the phone to ring: she once said, and in effect it never stopped. In the second Carry On film, Carry On Nurse (1959), Whitfield again played a nurse, tending to a bed-bound Kenneth Williams — a terrible flasher, she later recalled.

Television, then in its infancy, soon beckoned, and in 1961 she appeared in Tony Hancock's now classic sketch The Blood Donor. Yet again Whitfield played the nurse, but filming proved far from straightforward. Hancock had been in a car accident shortly before it, smashing his head against the windscreen when his wife, Cicely, braked to avoid some roadworks. A thick layer of make-up covered his bruises, but convinced that he was suffering from concussion, Hancock claimed that he could not remember his lines and insisted on reading them from a teleprompter. He barely looked at Whitfield throughout.

Of all the comics Whitfield worked with, her favourite was Howerd. The two first appeared together in a 1966 TV sketch show in which she played his girlfriend, the enticingly named Beryl Cuttlebunt. During rehearsals she decided that it would be a good idea if she ran her fingers through his hair. Howerd, however, was horrified, and suggested that she caress his shoulders instead. It was only later that Whitfield realised that he wore a wig.

In spite of this the two became good friends and Howerd would often invite himself round for supper at her house. "He had the strangest relationship with alcohol I've ever come across: Whitfield remembered. Howerd would start the evening with a triple vodka, down another two or three in quick succession, and then refuse to touch another drop all night.

When she was invited to appear in Carry On Abroad in 1971, Whitfield had visions of being whisked off to some exotic beach resort. Instead she turned up at Pinewood Studios to find that the beach consisted of several tonnes of builder's sand that had been deposited in the car park with a few deckchairs plonked on top.

Yet the film did yield one of the most memorable of all Carry On exchanges. when Whitfield is offered a drink by Sid James. "Not for me, thank you: she replies primly. "1 tried it once and I didn't like it."

What about a smoke then, he suggests. "No thank you: says Whitfield again. "l tried it once and I didn't like it."

"That's very strange: James replies. "Not at all," Whitfield tells him. "My daughter's just the same."

"Your only child. I presume: James says drily.

In the same year Whitfield and Howerd reunited to record a spoof version of Serge Gainsbourg and Jane Birkin's risque hit Je t'aime moi non plus, which had been banned by the BBC. In their version she did the heavy breathing while an appalled Howerd endeavoured to fight her off — "Control yourself, woman!" Much to their amusement this was also banned by the BBC.

Her most enduring comedy relationship was with Terry Scott (obituary, July 27, 1994), with whom she appeared first in Happy Ever After, which ran from 1974 to 1978, and then in its successor, Terry and June. While the show was resolutely cosy in tone, Scott was a lot less cuddly in real life. However, as had become her wont, Whitfield swiftly defused any awkwardness.

As demanding as he was tricky, Scott often used to tell Whitfield how to say her lines. "When he told me he wanted to change the way I was doing something, I'd just nod and say, 'Of course.' And then I'd carry on doing it the way I had always been doing it and he didn't seem to notice!"

Whitfield's domestic arrangements were just as harmonious as Terry and June's. She married Tim Aitchison, a chartered surveyor, in 1955, and they remained happily married until his death in 2001.

Their daughter, Suzy, also became an actress. "Mine is the epitome of the nice middle-class family life: Whitfield said proudly. She went on to state that she was "a great fan of the middle class. There are millions of them and yet people speak as if it's some disease."

If Whitfield looked the part, she was more eccentric than she appeared. As well as having a large collection of teddy bears at her immaculately tidy Wimbledon home, she had a mongrel called Rabbit that she had inherited from the comedian Jimmy Edwards. If she had an uneven number of guests for dinner, Whitfield would set a chair for Rabbit. "As people spoke he would turn and look at them: she said, "and you could almost feel him nodding."

In 1979, shortly after Margaret Thatcher came to power, Whitfield recorded another comedy record, What About the Workers with Sellers. He reprised Fred Kite, his character from the Boulting brothers film I'm All Right Jack, with Whitfield making a convincingly icy Mrs Thatcher. However, the record was not a success and nor was the partnership. "He was very peculiar and not at all funny in real life, she said of Sellers.

Eventually Terry and June itself fell victim to a form of class prejudice. At its height it pulled in 15 million viewers an episode, but in 1987 it was taken off air after BBC executives decided that the lifestyle portrayed in the show was out of date. While this effectively signalled the end of Scott's career, Whitfield's stood on the brink of a new golden age.

She had met Joanna Lumley when they appeared together in An Ideal Husband at Chichester Festival Theatre in 1987. Five years later Whitfield had a small role as Saunders's mother in the pilot of Absolutely Fabulous, in which Lumley played Saunders's drink-sodden friend, Patsy. Her agent was doubtful about the venture, and so was the BBC's head of comedy. "I'm not sure two women being drunk is very funny," he complained.

In the event Ab Fab, as it soon became known. proved a huge hit, and Whit-field's innocently withering comments were a key ingredient in its success. "What you two don't seem to realise is that inside of me there is a thin person lust screaming to get out: wailed an extravagantly self-pitying Saunders in an early episode, whereupon Whitfield replied brightly, "Just the one, dear?"

Despite saying she didn't think actors deserved awards for doing a job they loved, Whitfield was appointed OBE, CBE and, in 2017, dame. She appeared twice on This is Your Life and in 2009 was the subject of an entire evening's tribute programming on BBC Two. The offers of work kept on coming, and Whitfield was only too happy to oblige. In recent years she appeared in Coronation Street and EastEnders, in which she -played a nun, as well as in Doctor Who.

At the age of 88 Whitfield decided that she was becoming unfit and took on a personal trainer. Shortly before that, she had been asked for tips on how to remain positive in old age. As crisp 40 and pragmatic as ever, she declared: "Keep your fingers crossed and don't ' anticipate disaster."

Caption: June Whitfield. Below: in 2001 as Mother in Absolutely Fabulous, with Jennifer Saunders, Julia Sawalha and Joanna Lumley