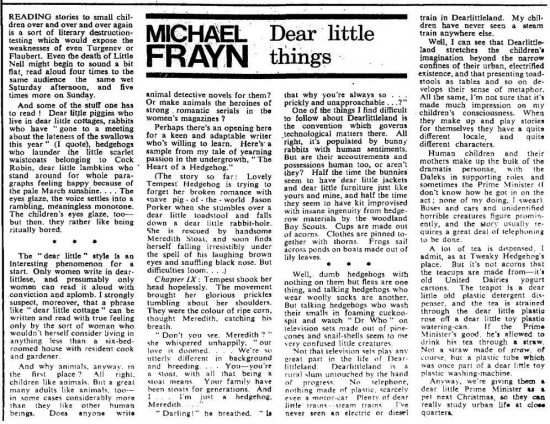 Not that television sets play any great part in the life of Dear-littleland. Dearlittleland is a rural slum untouched by the hand of progress. No telephone, nothing made of plastic, scarcely even a motorcar Plenty of dear little trains—steam trains I've never seen an electric or diesel train in Dearlittleland. My children have never seen a steam train anywhere else.

Well, I can see that Dearlittleland stretches the children's imagination beyond the narrow confines of their urban, electrified existence, and that presenting toadstools as tables and so on develops their sense of metaphor. All the same, I'm not sure that it's made much impression on my children's consciousness. When they make up and play stories for themselves they have a quite different locale, and quite different characters.

Human children and their mothers make up the bulk of the dramatis personae, with the Daleks in supporting roles, and sometimes the Prime Minister (I don't know how he got in on the act ; none of my doing, I swear). Buses and cars and unidentified horrible creatures figure prominently, and the story usually requires a great deal of telephoning to be done.

Anyway, we're giving them a dear little Prime Minister as a pet next Christmas, so they can really study urban life at close quarters.