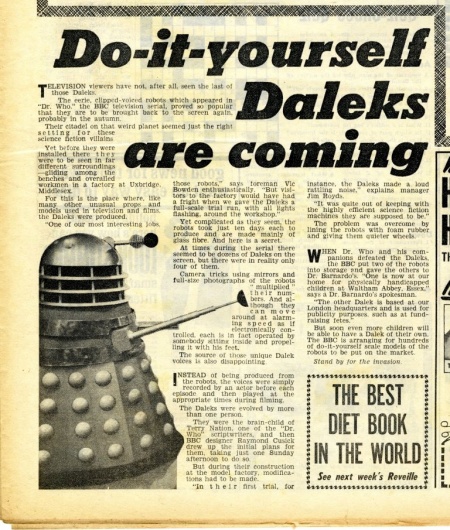 TELEVISION viewers have not, after all, seen the last of those Daleks.

The eerie, clipped-voiced robots which appeared in "Dr. Who," the BBC television serial, proved so popular that they are to be brought back to the screen again, probably in the autumn.

Their citadel on that weird planet seemed just the right setting for these science fiction villains.

Yet before they were installed there they were to be seen in far different surroundings—gliding among the benches and overcalled workmen in a factory at Uxbridge, Middlesex.

For this is the place where, like many other unusual props and models used to television and films, the Daleks were produced.

"One of our most interesting jobs. those robots," says foreman Vic Bowden enthusiastically. "But visitors to the factory would have had a fright when we gave the Daleks a full-scale trial run, with all lights flashing, around the workshop."

Yet complicated as they seem, the robots took just ten days each to produce and are made mainly of glass fibre. And here is a secret.

At times during the serial there seemed to be dozens of Daleks on the screen, but there were in reality only four of them.

Camera tricks using mirrors and full-size photographs of the robots "multiplied" their numbers. And although they can move around at alarming speed as if electronically controlled, each is in fact operated by somebody sitting inside and propelling it with his feet.

The source of those unique Dalek voices is also disappointing.

INSTEAD of being produced from the robots, the voices were simply recorded by an actor before each episode and then played at the appropriate times during filming.

The Daleks were evolved by more than one person.

They were the brain-child of Terry Nation, one of the "Dr. Who' scriptwriters, and then BBC designer Raymond Cusick drew up the initial plans for them, taking just one Sunday afternoon to do so.

But during their construction at the model factory. modifications had to be made.

"In their first trial, for Instance, the Daleks made a loud rattling noise." explains manager Jim Royds.

"It was quite out of keeping with the highly efficient science fiction machines they are supposed to be."

The problem was overcome by lining the robots with foam rubber and giving them quieter wheels.

WHEN Dr. Who and his companions defeated the Daleks. the BBC put two of the robots into storage end gave the others W Dr. Bernardo's. "One is now at our home for physically handicapped children at Waltham Abbey. Essex." says a Dr. Bernardo's spokesman,

"The other Dalek is based at our London headquarters and is used for publicity purposes. such as at fundraising fetes."

But soon even more children will be able to have a Dalek of their own. The BBC is arranging for hundreds of do-it-yourself scale models of the robots to be put on the market.

Stand by for the invasion.