Doctor, where am I? 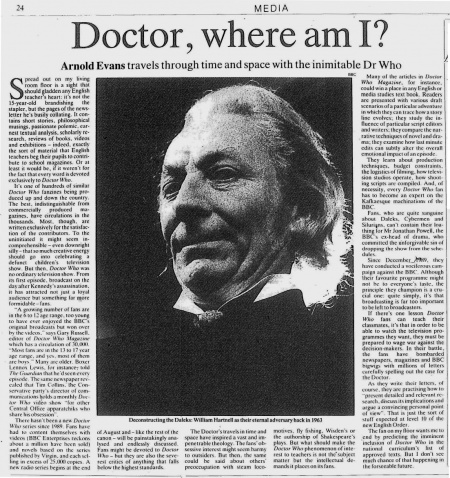 Spread out on my living room floor is a sight that should gladden any English teacher's heart: it's not the 15-year-old brandishing the stapler, but the pages of the newsletter he's busily collating. It contains short stories, philosophical musings, passionate polemic, earnest textual analysis, scholarly research, reviews of books, videos and exhibitions - indeed, exactly the sort of material that English teachers beg their pupils to contribute to school magazines. Or at least it would be, if it weren't for the fact that every word is devoted exclusively to Doctor Who.

It's one of hundreds of similar Doctor Who fanzines being produced up and down the country. The best, indistinguishable from commercially produced magazines, have circulations in the thousands. Most, though. are written exclusively for the satisfaction of the contributors. To the uninitiated it might seem incomprehensible - even downright silly- that so much creative energy should go into celebrating a defunct children's television show. But then, Doctor Who was no ordinary television show. From its first episode, broadcast on the day after Kennedy's assassination. it has attracted not just a loyal audience but something far more formidable - fans.

"A growing number of fans are in the 6 to 12 age range, too young to have ever enjoyed the BBC's original broadcasts but won over by the videos." says Gary Russell. editor of Doctor Who Magazine which has a circulation of 30,000. "Most fans are in the 13 to 17 year age range, and yes, most of them are boys." Many are older. Boxer Lennox Lewis, for instance, told The Guardian that he'd seen every episode. The same newspaper revealed that Tim Collins: the Conservative party's director of communications holds a monthly Doctor Who video show "for. other Central Office apparatchiks who share his obsession-.

There hasn't been a new Doctor Who series since 1989. Fans have had to content themselves with videos (BBC Enterprises reckons about a million have been sold) and novels based on the series published by Virgin, and each selling in excess of 25.000 copies. A new radio series begins at the end of August and - like the rest of the canon- will be painstakingly analysed and endlessly discussed. Fans might be devoted to Doctor Who - but they are also the severest critics of anything that falls below the highest standards.

The Doctor's travels in time and space have inspired a vast and impenetrable theology. The fans' obsessive interest might seem barmy to outsiders. But then, the same could he said about others' preoccupation with steam locomotives, fly fishing, Wisden's or the authorship of Shakespeare's plays. But what should make the Doctor Who phenomenon of interest to teachers is not the-subject matter but the intellectual demands it places on its fans.

Many of the articles in Doctor Who Magazine, for instance, could win a place in any English or media studies text book. Readers are presented with various draft scenarios of a particular adventure in which they can trace how a story line evolves; they study the influence of particular script editors and writers; they compare the narrative techniques of novel and dot-ma; they examine how last minute edits can subtly alter the overall emotional impact of an episode.

They learn about production techniques, budget constraints, the logistics of filming, how television studios operate, how shooting scripts are compiled. And, of necessity, every Doctor Who fan has to become an expert on the Kafkaesque machinations of the BBC.

Fans, who are quite sanguine about Daleks, Cybermen and Silurians. can't contain their loathing for Mr Jonathan Powell, the BBC's ex-head of drama, who committed the Unforgivable sin of dropping the show from the schedules.

Since December 1989, they have conducted a vociferous campaign against the BBC. Although their favourite programme might not be to everyone's taste, the principle they champion is a crucial one: quite simply, it's that broadcasting is far too important to be left to broadcasters.

If there's one lesson Doctor Who fans can teach their classmates, it's that in order to be able to watch the television programmes they want, they must be prepared to wage war against the decision-makers. In their battle, the fans have bombarded newspapers, magazines and BBC bigwigs with millions of letters carefully spelling out the case for the Doctor.

As they write their letters, of course, they are practising how to "present detailed and relevant research, discuss its implications and argue a convincing personal point of view". That is just the sort of stuff expected at level 10 of the new English Order.

The fan on my floor wants me to end by predicting the imminent 'inclusion of Doctor Who in the national curriculum's list of approved texts. But I don't see much chance of that happening in the forseeable future.

Caption: Deconstructing the Daleks: William Hartnell as their eternal adversary back in 1963