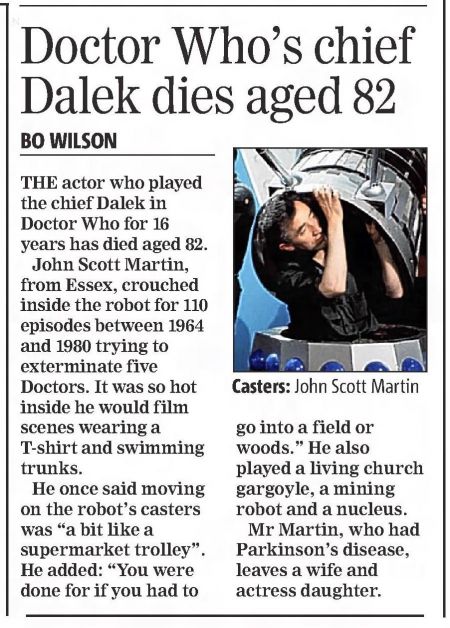 THE actor who played the chief Dalek in Doctor Who for 16 years has died aged 82.

John Scott Martin, from Essex, crouched inside the robot for 110 episodes between 1964 and 1980 trying to exterminate five Doctors.

It was so hot inside the Dalek model he would film scenes dressed in just a T-shirt and swimming trunks.

He once said moving on the robot's casters was "a bit like a supermarket trolley".

He added: "You were done for if you had to go into a field or woods.

You had to put down hardboard sheets." Mr Martin, who had Parkinson's disease, leaves a wife and a daughter.

Prior to his work as a Dalek, Mr Scott Martin played a Zarbi, a huge ant-like creature.

Fans recall that Mr Scott Martin auditioned for the role of Davros in 1974 but was unsuccessful.

In the sci-fi series he also played a living church gargoyle, a mining robot, a Welsh miner, a mutant and a nucleus.

Mr Scott Martin died on 6 January. His daughter, actress Catriona Martin, described him as "a perfect gentleman, warm, kind and funny. He will be missed by so many."