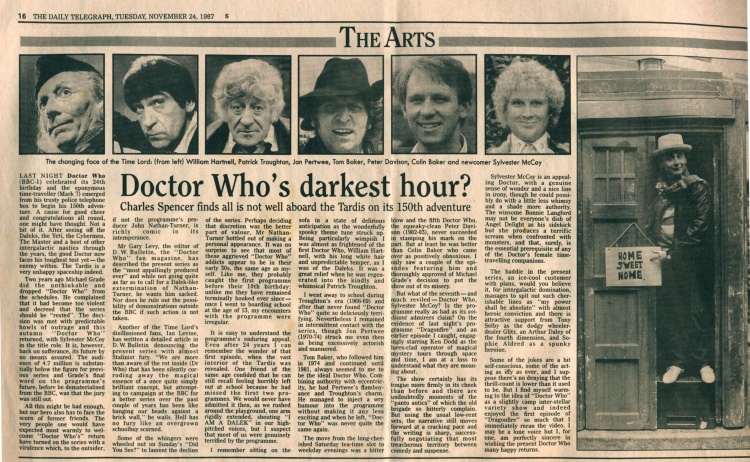 LAST NIGHT Doctor Who (BBC-1) celebrated its 24th birthday and the eponymous time-traveller (Mark 7) emerged from his trusty police telephone box to begin his 150th adventure. A cause for good cheer and congratulations all round, one might have thought. Not a bit of it. After seeing off the Daleks, the Yeti, the Cybermen, The Master and a host of other intergalactic nastier through the years, the good Doctor now faces his toughest test yet—the enemy within. The Tardis is a very unhappy spaceship indeed.

Two years ago Michael Grade did the unthinkable and dropped "Doctor Who" from the schedules. He complained that it had become too violent and decreed that the series should be "rested". The decision was met with predictable howls of outrage and this autumn "Doctor Who" returned, with Sylvester McCoy in the title role. It is, however, back on sufferance, its future by no means assured. The audience of 4.7 million is substantially below the figure for previous series and Grade's final word on the programme's future, before he dematerialised from the BBC, was that the jury was still out.

All this might be bad enough, but our hero also has to face the scorn of former friends. The very people one would have expected most warmly to welcome "Doctor Who's" return have turned on the series with a virulence which, to the outsider, if not the programme's producer John Nathan-Turner, is richly comic in its intemperance.

Mr Gary Levy, the editor of D. W. Bulletin, the "Doctor Who" fan magazine, has described the present series as the "most appallingly produced ever" and while not going quite as far as to call for a Dalek-like extermination of Nathan-Turner, he wants him sacked. Nor does he rule out the possibility of demonstrations outside the BBC if such action is not taken.

Another of the Time Lord's disillusioned fans, Ian Levine, has written a detailed article in D. W. Bulletin denouncing the present series with almost Stalinist fury. "We are more than aware of the rot inside (Dr Who) that has been silently corroding away the magical essence of a once quite simply brilliant concept, but attempting to campaign at the BBC for a better series over the past couple of years has been like banging our heads against a brick wall," he wails. Hell has no fury like an overgrown schoolboy scorned.

Some of the whingers were wheeled out on Sunday's "Did You See?" to lament the decline of the series. Perhaps deciding that discretion was the better part of valour, Mr Nathan-Turner bottled out of making a personal appearance. It was no surprise to see that most of these aggrieved "Doctor Who" addicts appear to be in their early 30s, the same age as myself. Like me, they probably caught the first programme before their 10th birthday: unlike me they have remained terminally hooked ever since —once I went to boarding school at the age of 13, my encounters with the programme were irregular.

It is easy to understand the programme's enduring appeal. Even after 24 years I can remember the wonder of that first episode, when the vast interior of the Tardis was revealed. One friend of the same age confided that he can still recall feeling horribly left out at school because he had missed the first two programmes. We would never have admitted it then, as we rushed around the playground, one arm rigidly extended, shouting "I AM A DALEK" in our high-pitched voices, but I suspect that most of us were genuinely terrified by the programme.

I remember sitting on the sofa in a state of delirious anticipation as the wonderfully spooky theme tune struck up. Being particularly wimpish I was almost as frightened of the first Doctor Who, William Hartnell, with his long white hair and unpredictable temper, as I was of the Daleks. It was a great relief when he was regenerated into the kindly and whimsical Patrick Troughton.

I went away to school during Troughton's era (1966-69) and after that never found "Doctor Who" quite so deliciously terrifying. Nevertheless I remained in intermittent contact with the series, though Jon Pertwee (1970-74) struck me even then as being excessively actorish and mannered.

Tom Baker, who followed him in 1974 and continued until 1981, always seemed to me to be the ideal Doctor Who. Combining authority with eccentricity, he had Pertwee's flamboyance and Troughton's charm. He managed to inject a wry humour into the programme without making it any less exciting and when he left, "Doctor Who" was never quite the same again.

The move from the long-cherished Saturday tea-time slot to weekday evenings was a bitter blow and the fifth Doctor Who, the squeaky-clean Peter Davison (1982-83), never succeeded in stamping his mark on the part. But at least he was better than Colin Baker who came over as positively obnoxious. I only saw a couple of the episodes featuring him and thoroughly approved of Michael Grade's decision to put the show out of its misery.

But what of the seventh — and much reviled— Doctor Who, Sylvester McCoy? Is the programme really as bad as its soi-disant admirers claim? On the evidence of last night's programme "Dragonfire" and an earlier episode I caught, engagingly starring Ken Dodd as the lurex-clad operator of magical mystery tours through space and time, I am at a loss to understand what they are moaning about.

The show certainly has its tongue more firmly in its cheek than before and there are undoubtedly moments of the "panto antics" of which the old brigade so bitterly complain. But using the usual low-rent sets, the narrative still moves forward at a cracking pace and the writing is sharp, successfully negotiating that most treacherous territory between comedy and suspense.

Sylvester McCoy is an appealing Doctor, with a genuine sense of wonder and a nice line in irony, though he could possibly do with a little less whimsy and a shade more authority. The winsome Bonnie Langford may not be everyone's dish of Angel Delight as his sidekick but she produces a terrific scream when confronted with monsters, and that, surely, is the essential prerequisite of any of the Doctor's female time-travelling companions.

The baddie in the present series, an ice-cool customer with plans, would you believe it, for intergalactic domination, manages to spit out such cherishable lines as "my power shall be absolute" with almost heroic conviction and there is attractive support from Tony Selby as the dodgy wheeler-dealer Glitz, an Arthur Daley of the fourth dimension, and Sophie Aldred as a spunky heroine.

Some of the jokes are a bit self-conscious, some of the acting as iffy as ever, and I suppose there's no denying that the thrill-count is lower than it used to be. But I find myself warming to the idea of "Doctor Who" as a slightly camp inter-stellar variety show and indeed enjoyed the first episode of "Dragonfire" so much that I immediately reran the video. I may be a lone voice but I, for one, am perfectly sincere in wishing the present Doctor Who many happy returns.