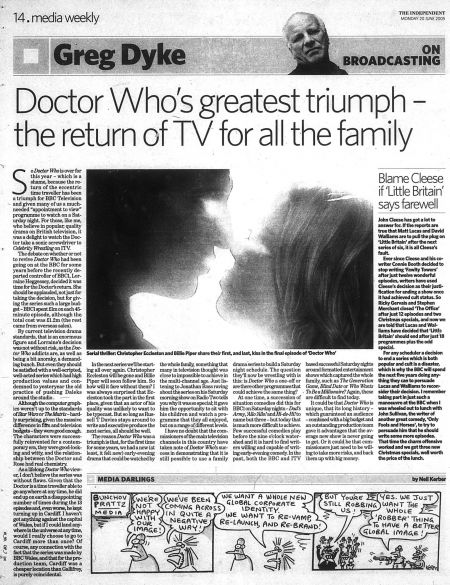 So Doctor Who is over for this year - which is a shame, because the return of the eccentric time traveller has been a triumph for BBC Television and given many of us a much-needed "appointment to view" programme to watch on a Saturday night. For those, like me, who believe in popular, quality drama on British television, it was a delight to watch the Doctor take a sonic screwdriver to Celebrity Wrestling on ITV.

The debate on whether or not to revive Doctor Who had been going on at the BBC for some years before the recently departed controller of BBC1, Lorraine Heggessey, decided it was time for the Doctor's return. She should be applauded, not just for taking the decision, but for giving the series such a large budget - BBC1 spent Elm on each 45-minute episode, although the total cost was £1.2m (the rest came from overseas sales).

By current television drama standards, that is an enormous figure and Lorraine's decision was not without risk, as the Doctor Who addicts are, as well as being a bit anoraky, a demanding bunch. But even they should be satisfied with a well-scripted, well-acted series which had high production values and condemned to yesteryear the old practice of pushing Daleks around the studio.

Although the computer graphics weren't up to the standards of star Wars or The Matrix - hardly surprising, given the massive difference in film and television budgets -they were good enough. The characters were successfully reinvented for a contemporary era, they were good-looking and witty, and the relationship between the Doctor and Rose had real chemistry.

As a lifelong Doctor Who viewer, I don't believe the series was without flaws. Given that the Doctor is a time traveller able to go anywhere at any time, he did end up on earth a disappointing number of times during the 13 episodes and, even worse, he kept turning up in Cardiff. I haven't got anything against the capital of Wales, but if I could land anywhere in the universe at any time, would I really choose to go to Cardiff more than once? Of course, any connection with the fact that the series was made by BBC Wales, and that for the production team, Cardiff was a cheaper location than Gallifrey, is purely coincidental.

In the next series we'll be starting all over again. Christopher Eccleston will be gone and Billie Piper will soon follow him. So how will it fare without them? I was always surprised that Eccleston took the part in the first place, given that an actor of his quality was unlikely to want to be typecast. But so long as Russell T Davies stays around to write and executive produce the next series, all should be well.

The reason Doctor Who was a triumph is that, for the first time for some years, we had a new (at least, it felt new) curly-evening drama that could be watched by the whole family, something that many in television thought was close to impossible to achieve in the multi-channel age. Just listening to Jonathan Ross raving about the series on his Saturday morning show on Radio Two tells you why it was. special; it gave him the opportunity to sit with his children and watch a programme that they all enjoyed, but on a range of different levels.

I have no doubt that the commissioners of the main television channels in this country have taken note of Doctor Who's success in demonstrating that it is still possible to use a family drama series to build a Saturday night schedule. The question they'll now be wrestling with is this: is Doctor Who a one-off or are there other programmes that could achieve the same thing?

At one time, a succession of situation comedies did this for BBC1 on Saturday nights - Dad's Army, 'Allo 'Allo! and Hi-de-Hi! to name but three - but today that is much more difficult to achieve. Few successful comedies play before the nine o'clock watershed and it is hard to find writers willing and capable of writing early-evening comedy. In the past, both the BBC and ITV based successful Saturday nights around formatted entertainment shows which captured the whole family, such as The Generation Game, Blind Date or Who Wants To Be a A Millionaire? Again, these are difficult to find today.

It could be that Doctor Who is unique, that its long history which guaranteed an audience - combined with a big budget and an outstanding production team gave it advantages that the average new show is never going to get. Or it could be that commissioners just need to be willing to take more risks, and back them up with big money.

Caption: Serial thriller. Christopher Eccleston and Billie Piper share their first, and last, kiss in the final episode of 'Doctor Who'