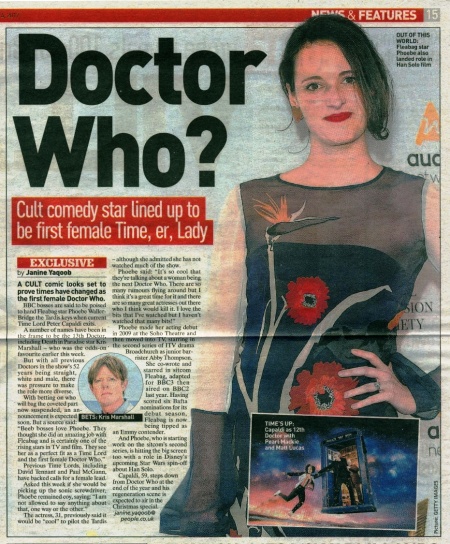 A CULT comic looks set to prove times have changed as the first female Doctor Who.

A number of names have been in the frame to be the 13th Doctor, including Death in Paradise star Kris Marshall - who was the odds-on favourite earlier this week.

But with all previous Doctors in the show's 52 years being straight, white and male, there was pressure to make the role more diverse.

With betting on who will bag the coveted part now suspended, an announcement is expected soon. But a source said: "Beeb bosses love Phoebe. They thought she did an amazing job with Fleabag and is certainly one of the rising stars in TV and film. They see her as a perfect fit as a Time Lord and the first female Doctor Who."

Previous Time Lords, including David Tennant and Paul McGann, have backed calls for a female lead.

Asked this week if she would be picking up the sonic screwdriver, Phoebe remained coy, saying: "I am not allowed to say anything about that, one way or the other."

The actress, 31, previously said it would be "cool" to pilot the Tardis - although she admitted she has not watched much of the show.

Phoebe said: "It's so cool that they're talking about a woman being the next Doctor Who. There are so many rumours flying around but I think it's a great time for it and there are so many great actresses out there who I think would kill it. I love the bits that I've watched but I haven't watched that many bits!"

Phoebe made her acting debut in 2009 at the Soho Theatre and moved into TV, starring in the second series of ITV drama Broadchurch as junior barrister Abby Thompson. She co-wrote and starred in sitcom

Fleabag, adapted for BBC3 then aired on BBC2 last year. Having scored six Bafta nominations for its debut season, Fleabag is now being tipped as an Emmy contender.

And Phoebe, who is starting work on the sitcom's second series, is hitting the big screen too with a role in Disney's upcoming Star Wars spin-off about Han Solo.

Capaldi, 59, steps down from Doctor Who at the end of the year and his regeneration scene is expected to air in the Christmas special.

Caption: TIME'S UP: Capaldi as 12th Doctor with Pearl Mackie and Matt Lucas