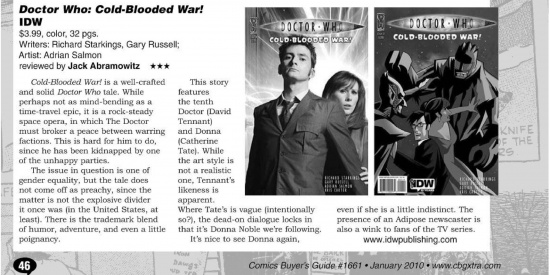 Cold-Blooded War! is a well-crafted and solid Doctor Who tale. While perhaps not as mind-bending as a time-travel epic, it is a rock-steady space opera, in which The Doctor must broker a peace between warring factions. This is hard for him to do, since he has been kidnapped by one of the unhappy parties.

The issue in question is one of gender equality, but the tale does not come off as preachy, since the matter is not the explosive divider it once was (in the United States, at least). There is the trademark blend of humor, adventure, and even a little poignancy.

This story features the tenth Doctor (David Tennant) and Donna (Catherine Tate). While the art style is not a realistic one, Tennant's likeness is apparent. Where Tate's is vague (intentionally so?), the dead-on dialogue locks in that it's Donna Noble we're following.

It's nice to see Donna again, even if she is a little indistinct. The presence of an Adipose newscaster is also a wink to fans of the TV series.