Doctor Who: The Visual Dictionary 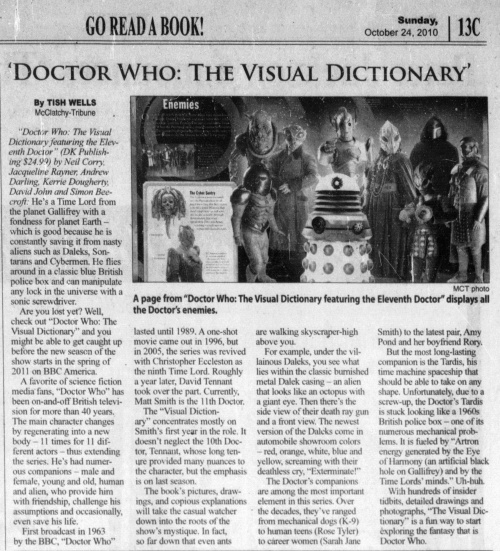 "Doctor Who: The Visual Dictionary featuring the Eleventh Doctor" (DK Publishing $24.99) by Neil Corry Jacqueline Rayner, Andrew Darling, Kerrie Dougherty. David John and Simon Bee-craft: He's a Time Lord from the planet Gallifrey with a fondness for planet Earth which is good because he is constantly saving it from nasty aliens such as Daleks, Sontarans and Cybermen. He flies around in a classic blue British police box and can manipulate any lock in the universe with a sonic screwdriver.

Are you lost yet? Well, check out "Doctor Who: The Visual Dictionary" and you might be able to get caught up before the new season of the show starts in the spring of 2011 on BBC America.

A favorite of science fiction media fans, "Doctor Who" has been on-and-off British television for more than 40 years. The main character changes by regenerating into a new body - 11 times for 11 different actors - thus extending the series. He's had numerous companions male and female, young and old, human and alien, who provide him with friendship, challenge his assumptions and occasionally, even save his life.

First broadcast in 1963 by the BBC, "Doctor Who" lasted until 1989. A one-shot movie came out in 1996, but in 2005, the series was revived with Christopher Eccleston as the ninth Time Lord. Roughly a year later, David Tennant took over the part. Currently, Man Smith is the 11th Doctor.

The "Visual Dictionary" concentrates mostly on Smith's first year in the role. It doesn't neglect the 10th Doctor, Tennant, whose long tenure provided many nuances to the character, but the emphasis is on last season.

The book's pictures, drawings, and copious explanations will take the casual watcher down into the roots of the show's mystique. In fact, so far down that even ants are walking skyscraper-high above you.

For example, under the villainous. Daleks, you see what lies within the classic burnished metal Dalek casing - an alien that looks like an octopus with a giant eye. Then there's the side view of their death ray gun and a front view. The newest version of the Daleks come in automobile showroom colors - red, orange, white, blue and yellow, screaming with their deathless cry, "Exterminate!"

The Doctor's companions are among the most important element in this series. Over the decades, they've ranged from mechanical dogs (K-9) to human teens (Rose Tyler) to career women (Sarah Jane Smith) to the latest pair, Amy Pond and her boyfriend Rory.

But the most long-lasting companion is the Tardis, his time machine spaceship that should be able to take on any shape. Unfortunately, due to a screw-up, the Doctor's Tardis is stuck looking like a 1960s British police box - one of its numerous mechanical problems. It is fueled by "Artron energy generated by the Eye of harmony (an artificial black hole on (Gallifrey) and by the Time Lords' minds." Uh-huh.

With hundreds of insider tidbits, detailed drawings and photographs, "The Visual Dictionary" is a fun way to start exploring the fantasy that is Doctor Who. Caption: A page from "Doctor Who: The Visual Dictionary featuring the Eleventh Doctor" displays all the Doctor's enemies.