Difference between revisions of "Doctor Who — Timeview" 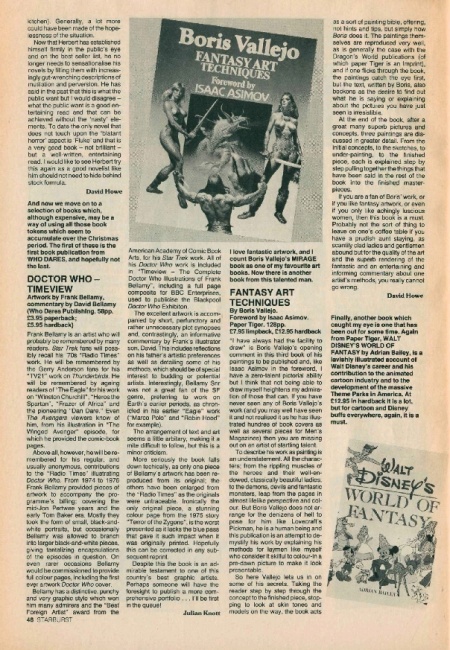 Frank Bellamy is an artist who will probably be remembered by many readers. Star Trek fans will possibly recall his '70s "Radio Times" work. He will be remembered by the Gerry Anderson fans for his "TV21" work on Thunderbirds. He will be remembered by ageing readers of "The Eagle" for his work on "Winston Churchill", "Heros the Spartan", "Frazer of Africa" and the pioneering "Dan Dare." Even The Avengers viewers know of him, from his illustration in "The Winged Avenger" episode, for which he provided the comic-book pages.

Above all, however, he will be remembered for his regular, and usually anonymous, contributions to the "Radio Times" illustrating Doctor Who. From 1974 to 1976 Frank Bellamy provided pieces of artwork to accompany the programme's billing; covering the mid-Jon Pertwee years and the early Tom Baker era. Mostly they took the form of small, black-and-white portraits, but occasionally Bellamy was allowed to branch into larger black-and-white pieces, giving tantalizing encapsulations of the episodes in question. On even rarer occasions Bellamy Would be commissioned to provide full colour pages, including the first ever artwork Doctor Who cover.

Bellamy has a distinctive, punchy and very graphic style which won him many admirers and the "Best Foreign Artist" award from the 48 STARBURST American Academy of Comic Book Arts, for his Star Trek work. All of his Doctor Who work is included in "Timeview - The Complete Doctor Who Illustrations of Frank Bellamy", including a full page composite for BBC Enterprises, used to publicise the Blackpool Doctor Who Exhibiton.

The excellent artwork is accompanied by short, perfunctory and rather unnecessary plot synopses and, contrastingly, an informative commentary by Frank's illustrator son, David. This includes reflections on his father's artistic preferences as well as detailing some of his methods, which should be of special interest to budding or potential artists. Interestingly, Bellamy Snr was not a great fan of the SF genre, preferring to work on Earth's earlier periods, as chronicled in his earlier "Eagle" work ("Marco Polo" and "Robin Hood" for example).

The arrangement of text and art seems a little arbitary, making it a mite difficult to follow, but this is a minor criticism.

More seriously the book falls down techically, as only one piece of Bellamy's artwork has been reproduced from its original; the others have been enlarged from the "Radio Times" as the originals were untraceable. Ironically the only original piece, a stunning colour page from the 1975 story "Terror of the Zygons", is the worst presented as it lacks the blue pass that gave it such impact when it was originally printed. Hopefully this can be corrected in any subsequent reprint.

Despite this the book is an admirable testament to one of this country's best graphic artists. Perhaps someone will have the foresight to publish a more comprehensive portfolio ... I'll be first in the queue!