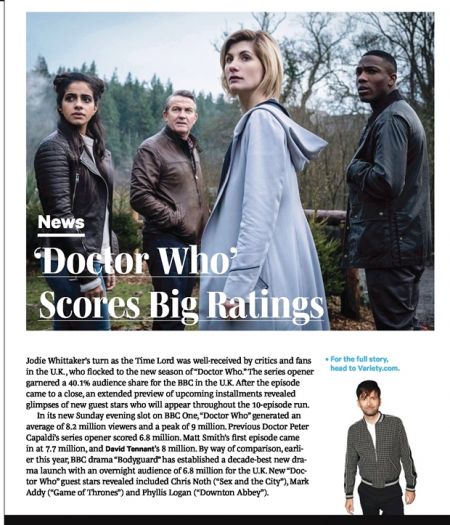 Jodie Whittaker's turn as the Time Lord was well-received by critics and fans in the U.K., who flocked to the new season of "Doctor Who." The series opener garnered a 40.1% audience share for the BBC in the U.K. After the episode came to a close, an extended preview of upcoming installments revealed glimpses of new guest stars who will appear throughout the 19-episode run.

In its new Sunday evening slot on BBC One, "Doctor Who" generated an average of 8.2 million viewers and a peak of 9 million. Previous Doctor Peter Capaldi's series opener scored 6.8 million. Matt Smith's first episode came in at 7.7 million, and David Tennant's 8 million. By way of comparison, earlier this year, BBC drama "Bodyguard has established a decade-best new drama launch with an overnight audience of 6.8 million for the U.K. New "Doctor Who" guest stars revealed included Chris Noth ("Sex and the City"), Mark Addy ("Game of Thrones") and Phyllis Logan ("Downton Abbey").