Doctor Who comes down to earth 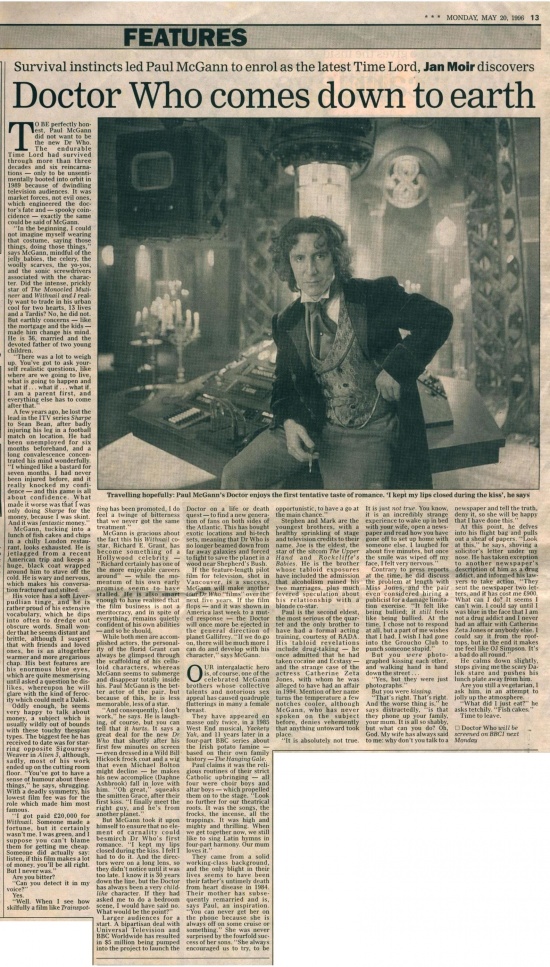 TO BE perfectly honest, Paul McGann did not want to be the new Dr Who. The endurable Time Lord had survived through more than three decades and six reincarnations — only to be unsentimentally booted into orbit in 1989 because of dwindling television audiences. It was market forces, not evil ones, which engineered the doctor's fate and — spooky coincidence — exactly the same could be said of McGann.

"In the beginning, I could not imagine myself wearing that costume, saying those things, doing those things," says McGann, mindful of the jelly babies, the celery, the woolly scarves, the yo-yos, and the sonic screwdrivers associated with the character. Did the intense, prickly star of The Monocled Mutineer and Withnail and I really want to trade in his urban cool for two hearts, 13 lives and a Tardis? No, he did not. But earthly concerns — like the mortgage and the kids —made him change his mind. He is 36, married and the devoted father of two young children.

A few years ago, be lost the lead in the ITV series Sharpe to Sean Bean, after badly injuring his leg in a football match on location. He had been unemployed for six months beforehand, and a long convalescence concentrated his mind wonderfully. "I whinged like a bastard for seven months. I had never been injured before, and it really knocked my confidence — and this game is all about confidence. What made it worse was that I was only doing Sharpe for the money, because I was skint. And it was fantastic money."

McGann, tucking into a lunch of fish cakes and chips in a chilly London restaurant, looks exhausted. He is jetlagged from a recent American trip and keeps a huge, black coat wrapped around him to stave off the cold. He is wary and nervous, which makes his conversation fractured and stilted.

His voice has a soft Liverpudlian tinge, and he is rather proud of his extensive vocabulary, which he dips into often to dredge out obscure words. Small wonder that he seems distant and brittle, although I suspect that with friends and loved ones, he is an altogether warmer and more gregarious chap. His best features are his enormous blue eyes, which are quite mesmerising until asked a question he dislikes, whereupon he will glare with the kind of ferocity which could melt a Dalek.

Oddly enough, he seems very happy to talk about money, a subject which is usually wildly out of bounds with these touchy thespian types. The biggest fee he has received to date was for starring opposite Sigourney Weaver in Alien 3, although, sadly, most of his work ended up on the cutting room floor. "You've got to have a sense of humour about these things," he says, shrugging. With a deadly symmetry, his lowest film fee was for the role which made him most famous.

"I got paid £20,000 for Withnail. Someone made a fortune, but it certainly wasn't me. I was green, and I suppose you can't blame them for getting me cheap. Someone did actually say: listen, if this film makes a lot of money, you'll be all right. But I never was."

"Can you detect it in my voice?"

"Well. When I see how skilfully a film like Trainspotting has been promoted, I do feel a twinge of bitterness that we never got the same treatment."

McGann is gracious about the fact this his Withnail costar, Richard E. Grant, has become something of a Hollywood celebrity —"Richard certainly has one of the more enjoyable careers around" — while the momentum of his own early promise seems to have stalled. He is also stn enough to have realised that the film business is not a meritocracy, and in spite of everything, remains quietly confident of his own abilities — and so he should.

While both men are accomplished actors, the personality of the florid Grant can always be glimpsed through the scaffolding of his celluloid characters, whereas McGann seems to submerge and disappear totally inside his. Paul McGann is the better actor of the pair, but because of this, he is less memorable, less of a star.

"And consequently, I don't work," he says. He is laughing, of course, but you can tell that it hurts. It says a great deal for the new Dr Who that shortly after his first few minutes on screen — even dressed in a Wild Bill Hickock frock coat and a wig that even Michael Bolton might decline — he makes his new accomplice (Daphne Ashbrook) fall in love with him. "Oh great," squeaks the smitten Grace, after their first kiss. "I finally meet the right guy, and he's from another planet."

But McGann took it upon himself to ensure that no element of carnality could besmirch Dr Who's first romance. "I kept my lips closed during the kiss. I felt I had to do it. And the directors were on a long lens, so they didn't notice until it was too late. I know it is 30 years down the line, but the Doctor has always been a very childlike character. If they had asked me to do a bedroom scene, I would have said no. What would be the point?"

Larger audiences for a start. A bipartisan deal with Universal Television and BBC Worldwide has resulted in $5 million being pumped into the project to launch the Doctor on a life or death quest — to find a new generation of fans on both sides of the Atlantic. This has bought exotic locations and hi-tech sets, meaning that Dr Who is no longer beamed down from far away galaxies and forced to fight to save the planet in a wood near Shepherd's Bush.

If the feature-length pilot film for television, shot in Vancouver, is a success, McGann will make another four Dr Who "films" over the next five years. If the film flops — and it was shown in America last week to a muted response — the Doctor will once more be ejected in the general direction of planet Gallifrey. "If we do go on, there will be much more I can do and develop with his character," says McGann.

OUR intergalactic hero is, of course, one of the celebrated McGann brothers whose collective talents and notorious sex appeal has caused quadruple flutterings in many a female breast.

They have appeared en masse only twice, in a 1985 West End musical, Yackety Yak, and 11 years later in a four-part BBC series about the Irish potato famine —based on their own family history —The Hanging Gale.

Paul claims it was the religious routines of their strict Catholic upbringing — all four were choir boys and altar boys — which propelled them on to the stage. "Look no further for our theatrical roots. It was the songs, the frocks, the incense, all the trappings. It was high and mighty and thrilling. When we get together now, we still like to sing Latin hymns in four-part harmony. Our mum loves it."

They came from a solid working-class background, and the only blight in their lives seems to have been their father's untimely death from heart disease in 1984. Their mother has subsequently remarried and is, says Paul, an inspiration. "You can never get her on the phone because she is always off on some cruise or something." She was never surprised by the fourfold success of her sons. "She always encouraged us to try, to be opportunistic, to have a go at the main chance."

Stephen and Mark are the youngest brothers, with a healthy sprinkling of stage and television credits to their name. Joe is the eldest, the star of the sitcom The Upper Hand and Rockcliffe's Babies. He is the brother whose tabloid exposures have included the admission that alcoholism ruined his two marriages, plus much fevered speculation about his relationship with a blonde co-star.

Paul is the second eldest, the most serious of the quartet and the only brother to have had a formal acting training, courtesy of RADA. His tabloid revelations include drug-taking — he once admitted that he had taken cocaine and Ecstasy —and the strange case of the actress Catherine Zeta Jones, with whom he was alleged to have had an affair in 1994. Mention of her name turns the temperature a few notches cooler, although McGann, who has never spoken on the subject before, denies vehemently that anything untoward took place.

"It is absolutely not true. It is just not true. You know, it is an incredibly strange experience to wake up in bed with your wife, open a newspaper and read how you have gone off to set up home with someone else. I laughed for about five minutes, but once the smile was wiped off my face, I felt very nervous."

Contrary to press reports at the time, he did discuss the problem at length with Miss Jones, and the pair even considered hiring a publicist for a damage limitation exercise. "It felt like being bullied; it still feels like being bullied. At the time. I chose not to respond at all, but a part of me wishes that I had. I wish I had gone into the Groucho Club to punch someone stupid."

But you were photographed kissing each other, and walking hand in hand down the street ...

"Yes, but they were just photographs."

But you were kissing.

"That's right. That's right. And the worse thing is," he says distractedly, "is that they phone up your family, your mum. It is all so shabby, but what can you do? Oh, God. My wife has always said to me: why don't you talk to a newspaper and tell the truth, deny it, so she will be happy that I have done this."

At this point, he delves into his flight bag and pulls out a sheaf of papers. "Look at this," he says, shoving a solicitor's letter under my nose. He has taken exception to another newspaper's description of him as a drug addict, and informed his lawyers to take action. "They sent the newspaper two letters, and it has cost me £900. What can I do? It seems I can't win. I could say until I was blue in the face that I am not a drug addict and I never had an affair with Catherine Zeta Jones or anybody else. I could say it from the rooftops, but in the end it makes me feel like OJ Simpson. It's a bad do all round."

He calms down slightly, stops giving me the scary Dalek stare and pushes his lunch plate away from him.

Are you still a vegetarian, I ask him, in an attempt to jolly up the atmosphere.

"What did I just eat?" he asks tetchily. "Fish cakes." Time to leave.

Doctor Who will be screened on BBC1 next Monday

Caption: Travelling hopefully: Paul McGann's Doctor enjoys the first tentative taste of romance. 'I kept my lips closed during the kiss', he says