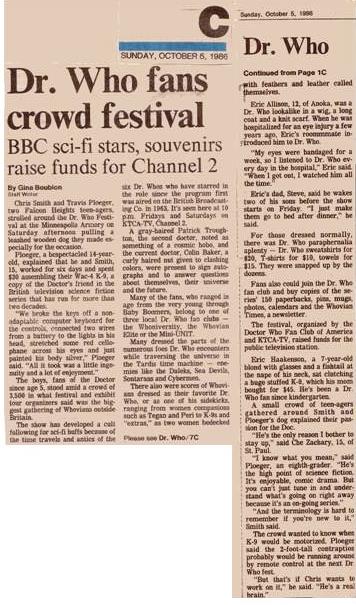 Chris Smith and Travis Ploeger, two Falcon Heights teen-agers, strolled around the Doctor who Festival at the Minneapolis Armory on Saturday afternoon pulling a leased wooden dog they made especially for the occasion.

Plummer, a bespectacled 14-year-old, explained that he and Smith, 15, worked for six days and spent $30 assembling their Wac-4 K-9, a copy of the Doctor's friend in the British television science fiction series that has run for more than two decades.

"We broke the keys off a non-adaptable computer keyboard for the controls, connected to wires from a battery to the lights in his head, stretch some red cellophane across his eyes and just painted his body silver," Ploeger said. "All it took was a little ingenuity and a lot of enjoyment."

The boys, fans of Doctor since age 5, stood amid a crowd of 3,500 in what festival and exhibit tour organizers said was the biggest gathering of Whovians outside Britain.

The show has developed a cult following for sci-fi buffs because of the time travels and antics of the six Doctor Whos who have starred in the role since the program first was aired on the British Broadcasting Co. in 1963. It seen here at 10 p.m. Fridays and Saturdays on KTCA-TV, Channel 2.

A gray-haired Patrick Troughton, the second Doctor, noted as something of a cosmic hobo, and the current Doctor, Colin Baker, a curly haired nut given to clashing colors, were present to sign autographs and to answer questions about themselves, their universe and the future.

Many of the fans, who ranged in age from the very young through Baby Boomers, belong to one of three local Dr. Who fan clubs -- the Whoniversity, the Whovian Elite or the Mini-UNIT.

Many dressed the parts of the numerous foes Dr. Who encounters while traversing the universe in the Tardis time machine -- enemies like the Daleks, Sea Devils, Sontarans and Cybermen.

There also were scores of Whovians dressed as their favorite Dr. Who, or as one of his sidekicks, ranging from women companions such as Tegan and Peri to K-9s and "extras," has two women be bedecked with feathers and leather called themselves.

Eric Allison, 12, of Anoka, was a Dr. Who lookalike in a wig, a long coat and a knit scarf. When he was hospitalized for an eye injury a few years ago, it's roommate introduced him to Dr. Who.

"My eyes were bandaged for week, so I listened to Dr. Who every day and the hospital," Eric said. "When I got out, I watched him all the time."

Eric's dad, Steve, said he wakes two of his sons before the show starts on Friday. "I just make them go to bed after dinner," he said.

For those dressed normally, there was a Dr. Who paraphernalia aplenty -- Dr. Who sweatshirts for $20, T-shirts for $10, towels for $15. They were snapped up by the dozens.

Fans could also joined the Doctor Who Fan Club and buy copies of the series 150 paperbacks, pens, mugs, photos, calendars and the Whovian Times, a newsletter.

The festival, organized by the Doctor Who Fan Club of America and KTCA-TV, raised funds for the public television station.

Eric Haakenson, a 7-year-old blond with glasses and a fishtail at the nape of his neck, sat clutching a huge stuffed K-9, which his mom bought for $45. He's been a Dr. Who fan since kindergarten.

A small crowd of teenagers gathered around Smith and Ploeger's dog explained their passion for the Doc.

"I know which you mean," said Ploeger, an eighth grader. "He's the high point of science fiction. It's enjoyable, comic drama. But you just can't tune in and understand what's going on right away because it's an on-going series."

"And the terminology is hard to remember if you're new to it," Smith said.

The crowd wanted to know when K-9 would be motorized. Ploeger said the 2-foot-tall contraption probably would be running around by remote control that the next Dr. Who fest.