Doctor Who fans get catharsis 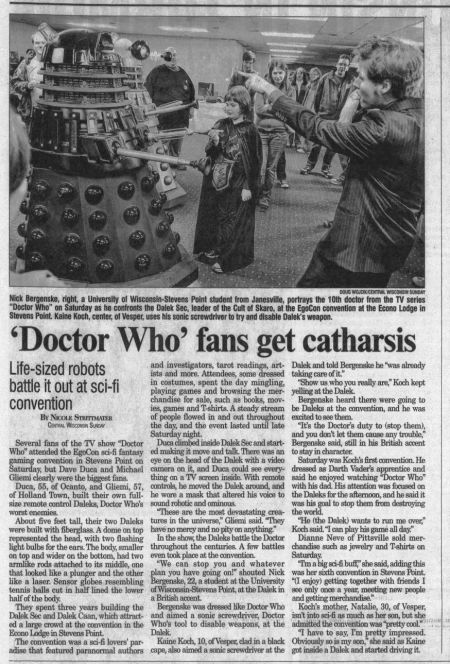 Life-sized robots battle it out at sci-fi convention

Several fans of the TV show "Doctor Who" attended the EgoCon sci-fi fantasy gaming convention in Stevens Point on Saturday, but Dave Duca and Michael Gliemi clearly were the biggest fans.

Duca, 55, of Ocanto, and Gliemi, 57, of Holland Town, built their own full-size remote control Daleks, Doctor Who's worst enemies.

About five feet tall, their two Daleks were built with fiberglass. A dome on top represented the head, with two flashing light bulbs for the ears. The body, smaller on top and wider on the bottom, had two armlike rods attached to its middle, one that looked like a plunger and the other like a laser. Sensor globes resembling tennis balls cut in half lined the lower half of the body.

They spent three years building the Dalek Sec and Dalek Caan, which attracted a large crowd at the convention in the Econo Lodge in Stevens Point.

The convention was a sci-fi lovers' paradise that featured paranormal authors and investigators, tarot readings, artists and more. Attendees, some dressed in costumes, spent the day mingling, playing games and browsing the merchandise for sale, such as books, movies, games and T-shirts. A steady stream of people flowed in and out throughout the day, and the event lasted until late Saturday night.

Duca climbed inside Dalek Sec and started making it move and talk. There was an eye on the head of the Dalek with a video camera on it, and Duca could see everything on a TV screen inside. With remote controls, he moved the Dalek around, and he wore a mask that altered his voice to sound robotic and ominous.

These are the most devastating creatures in the universe," Gliemi said. They have no mercy and no pity on anything."

In the show, the Daleks battle the Doctor throughout the centuries. A few battles even took place at the convention.

"We can stop you and whatever plan you have going on!" shouted Nick Bergenske, 22, a student at the University of Wisconsin-Stevens Point, at the Dalek in a British accent.

Bergenske was dressed like Doctor Who and aimed a sonic screwdriver, Doctor Who's tool to disable weapons, at the Dalek.

Kaine Koch, 10, of Vesper, clad in a black cape, also aimed a sonic screwdriver at the Dalek and told Bergenske he "was already taking care of it."

"Show us who you really are," Koch kept yelling at the Dalek.

Bergenske heard there were going to be Daleks at the convention, and he was excited to see them.

"It's the Doctor's duty to (stop them), and you don't let them cause any trouble," Bergenske said, still in his British accent to stay in character.

Saturday was Koch's first convention. He dressed as Darth Vader's apprentice and said he enjoyed watching "Doctor Who" with his dad. His attention was focused on the Daleks for the afternoon, and he said it was his goal to stop them from destroying the world.

Dianne Neve of Pittsville sold merchandise such as jewelry and T-shirts on Saturday.

"I'm a big sci-fi buff" she said, adding this was her sixth convention in Stevens Point. "(I enjoy) getting together with friends I see only once a year, meeting new people and getting merchandise."

Koch's mother, Natalie, 30, of Vesper, isn't into sci-fi as much as her son, but she admitted the convention was "pretty cool."

"I have to say, I'm pretty impressed. Obviously so is my son," she said as Kaine got inside a Dalek and started driving it.

Caption: Nick Bergenske, right, a University of Wisconsin-Stevens Point student from Janesville, portrays the 10th doctor from the TV series "Doctor Who" on Saturday as he confronts the Dalek Sec, leader of the Cult of Skaro, at the EgoCon convention at the Econo Lodge in Stevens Point. Kaine Koch, center, of Vesper, uses his sonic screwdriver to try and disable Dalek's weapon.