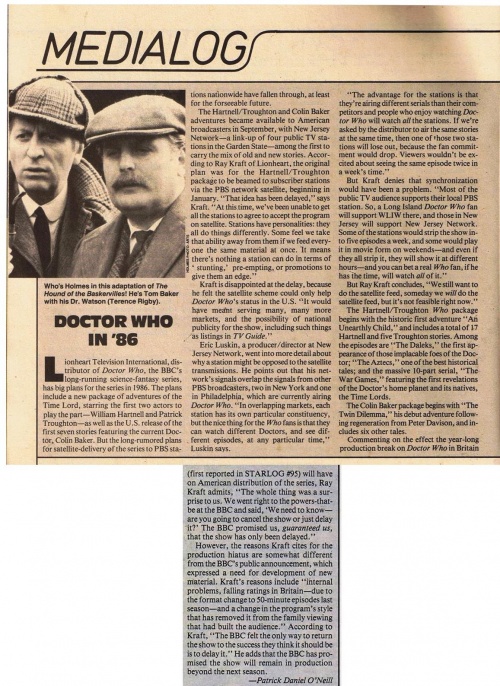 Lionheart Television International, distributor of Doctor Who, the BBC's long-running science-fantasy series, has big plans for the series in 1986. The plans include a new package of adventures of the Time Lord, starring the first two actors to play the part—William Hartnell and Patrick Troughton—as well as the U.S. release of the first seven stories featuring the current Doctor, Colin Baker. But the long-rumored plans for satellite-delivery of the series to PBS stations nationwide have fallen through, at least for the forseeable future.

The Hartnell/Troughton and Colin Baker adventures became available to American broadcasters in September, with New Jersey Network—a link-up of four public TV stations in the Garden State—among the first to carry the mix of old and new stories. According to Ray Kraft of Lionheart, the original plan was for the Hartnell/Troughton package to be beamed to subscriber stations via the PBS network satellite, beginning in January. "That idea has been delayed," says Kraft. "At this time, we've been unable to get all the stations to agree to accept the program on satellite. Stations have personalities: they all do things differently. Some feel we take that ability away from them if we feed everyone the same material at once. It means there's nothing a station can do in terms of stunting,' pre-empting, or promotions to give them an edge."

Kraft is disappointed at the delay, because he felt the satellite scheme could only help Doctor Who's status in the U.S. "It would have meant serving many, many more markets, and the possibility of national publicity for the show, including such things as listings in TV Guide."

Eric Luskin, a producer/director at New Jersey Network, went into more detail about why a station might be opposed to the satellite transmissions. He points out that his network's signals overlap the signals from other PBS broadcasters, two in New York and one in Philadelphia, which are currently airing Doctor Who. "In overlapping markets, each station has its own particular constituency, but the nice thing for the Who fans is that they can watch different Doctors, and see different episodes, at any particular time," Luskin says.

"The advantage for the stations is that they're airing different serials than their competitors and people who enjoy watching Doctor Who will watch all the stations. If we're asked by the distributor to air the same stories at the same time, then one of those two stations will lose out, because the fan commitment would drop. Viewers wouldn't be excited about seeing the same episode twice in a week's time."

But Kraft denies that synchronization would have been a problem. "Most of the public TV audience supports their local PBS station. So, a Long Island Doctor Who fan will support WLIW there, and those in New Jersey will support New Jersey Network. Some of the stations would strip the show into five episodes a week, and some would play it in movie form on weekends—and even if they all strip it, they will show it at different hours—and you can bet a real Who fan, if he has the time, will watch all of it."

The Hartnell/Troughton Who package begins with the historic first adventure "An Unearthly Child," and includes a total of 1.7 Hartnell and five Troughton stories. Among the episodes are "The Daleks," the first appearance of those implacable foes of the Doctor; "The Aztecs," one of the best historical tales; and the massive 10-part serial, "The War Games," featuring the first revelations of the Doctor's home planet and its natives, the Time Lords.

The Colin Baker package begins with "The Twin Dilemma," his debut adventure following regeneration from Peter Davison, and includes six other tales.

Commenting on the effect the year-long production break on Doctor Who in Britain (first reported in STARLOG #95) will have on American distribution of the series, Ray Kraft admits, "The whole thing was a surprise to us. We went right to the powers-that-be at the BBC and said, 'We need to know—are you going to cancel the show or just delay it?' The BBC promised us, guaranteed us, that the show has only been delayed."

However, the reasons Kraft cites for the production hiatus are somewhat different from the BBC's public announcement, which expressed a need for development of new material. Kraft's reasons include "internal problems, falling ratings in Britain—due to the format change to 50-minute episodes last season—and a change in the program's style that has removed it from the family viewing that had built the audience." According to Kraft, "The BBC felt the only way to return the show to the success they think it should be is to delay it." He adds that the BBC has promised the show will remain in production beyond the next season.

Caption: Who's Holmes in this adaptation of The Hound of the Baskervilles! He's Tom Baker with his Dr. Watson (Terence Rigby).