Doctor Who is back and looking better than ever 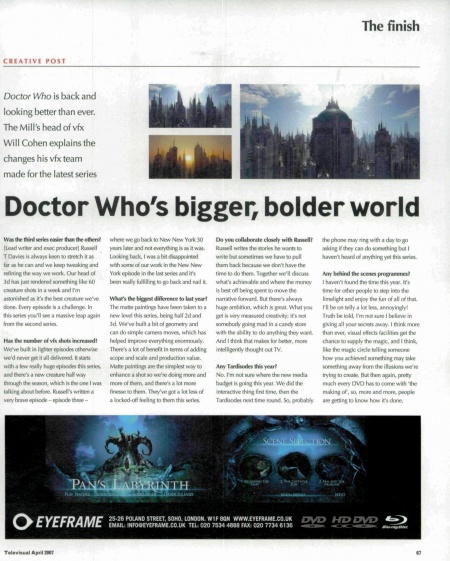 Doctor Who is back and looking better than ever. The Mill's head of vfx Will Cohen explains the changes his vfx team made for the latest series

Was the third series easier than the others?

[Lead writer and exec producer] Russell T Davies is always keen to stretch it as far as he can and we keep tweaking and refining the way we work. Our head of 3d has just rendered something like 60 creature shots in a week and I'm astonished as it's the best creature we've done. Every episode is a challenge. In this series you'll see a massive leap again from the second series.

Has the number of vfx shots increased?

We've built in lighter episodes otherwise we'd never get it all delivered. It starts with a few really huge episodes this series, and there's a new creature half way through the season, which is the one I was talking about before. Russell's written a very brave episode - episode three - where we go back to New New York 30 years later and not everything is as it was. Looking back, I was a bit disappointed with some of our work in the New New York episode in the last series and it's been really fulfilling to go back and nail it.

The matte paintings have been taken to a new level this series, being half 2d and 3d. We've built a bit of geometry and can do simple camera moves, which has helped improve everything enormously. There's a lot of benefit in terms of adding scope and scale and production value. Matte paintings are the simplest way to enhance a shot so we're doing more and more of them, and there's a lot more finesse to them. They've got a lot less of a locked-off feeling to them this series.

Do you collaborate closely with Russell?

Russell writes the stories he wants to write but sometimes we have to pull them back because we don't have the time to do them. Together we'll discuss what's achievable and where the money is best off being spent to move the narrative forward. But there's always huge ambition, which is great. What you get is very measured creativity; it's not somebody going mad in a candy store with the ability to do anything they want. And I think that makes for better, more intelligently thought out TV.

No. I'm not sure where the new media budget is going this year. We did the interactive thing first time, then the Tardisodes next time round. So, probably the phone may ring with a day to go asking if they can do something but haven't heard of anything yet this series.

Any behind the scenes programmes?

I haven't found the time this year. It's time for other people to step into the limelight and enjoy the fun of all of that. I'll be on telly a lot less, annoyingly! Truth be told, I'm not sure I believe in giving all your secrets away. I think more than ever, visual effects facilities get the chance to supply the magic, and I think, like the magic circle telling someone how you achieved something may take something away from the illusions we're trying to create. But then again, pretty much every DVD has to come with 'the making of', so, more and more, people are getting to know how it's done.