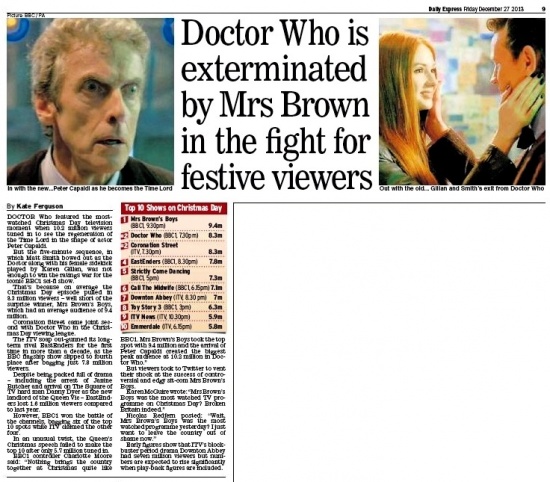 In with the new... Peter Capaldi as he becomes the Time Lord DOCTOR Who featured the most-watched Christmas Day television moment when 10.2 million viewers tuned in to see the regeneration of the Time Lord in the shape of actor Peter Capaldi.

But the five minute sequence, in which Matt Smith bowed out as the Doctor along with his female sidekick played by Karen Gillan, was not enough to win the ratings war for the iconic BBC1 sci-fi show.

That's because on average the Christmas Day episode pulled in 8.3 million viewers – well short of the surprise winner, Mrs Brown's Boys, which had an average audience of 9.4 million.

The ITV soap outgunned its long-term rival EastEnders for the first time in more than a decade, as the BBC flagship show slipped to fourth place after bagging just 7.8 million viewers.

Despite being packed full of drama – including the arrest of Janine Butcher and arrival on The Square of TV hard man Danny Dyer as the new landlord of the Queen Vic – EastEnders lost 1.6 million viewers compared to last year.

However, BBC1 won the battle of the channels, bagging six of the top 10 spots while ITV claimed the other four.

In an unusual twist, the Queen's Christmas speech failed to make the top 10 after only 5.7 million tuned in.

BBC1 controller Charlotte Moore said: "Nothing brings the country together at Christmas quite like BBC1. Mrs Brown's Boys took the top spot with 9.4 million and the arrival of Peter Capaldi created the biggest peak audience at 10.2 million in Doctor Who."

But viewers took to Twitter to vent their shock at the success of controversial and edgy sit-com Mrs Brown's Boys.

Nicolas Redfern posted "Wait, MRs Brown's Boys was the most watched programme yesterday? I just want to leave the country out of shame now."

Early figures show that ITV's blockbuster period drama Downton Abbey had seven million viewers but numbers are expected to rise significantly when play-back figures are include."

Caption: In with the new ... Peter Capaldi becomes the Time Lord

Caption: Out with the old ... Gillan and Smith's exit from Doctor Who