Doctor Who is for fans only 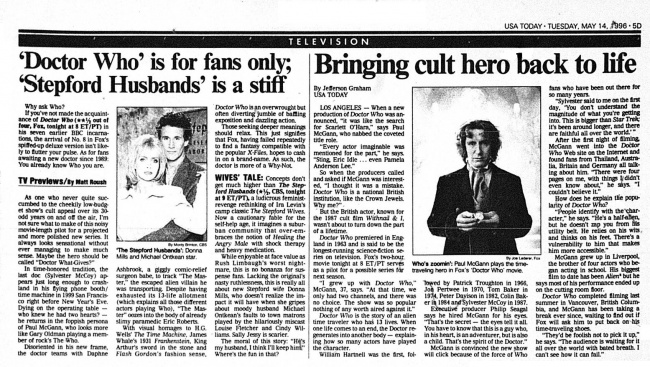 If you've not made the acquaintance of Doctor Who (★★ 1/2 out of four, Fox, tonight at 8 ET/PT) in his seven earlier BBC incarnations, the arrival of No. 8 in Fox's spiffed-up deluxe version isn't likely to flutter your pulse. As for fans awaiting a new doctor since 1989: You already know Who you are.

As one who never quite succumbed to the cheekily low-budget show's cult appeal over its 30-odd years on and off the air, I'm not sure what to make of this noisy movie-length pilot for a projected and more polished new series. It always looks sensational without ever managing to make much sense. Maybe the hero should be called "Doctor What-Gives?"

time machine in 1999 San Francisco right before New Year's Eve. Dying on the operating table -- who knew he had two hearts? -- he returns in the foppish persona of Paul McGann, who looks more like Gary Oldman playing a member of rock's The Who.

Disoriented in his new frame, the doctor teams with Daphne Ashbrook, a giggly comic-relief surgeon babe, to track "The Master," the escaped alien villain he was transporting. Despite having exhausted its 13-life allotment (which explains all those different actors playing Who), "The Master" oozes into the body of already slimy paramedic Eric Roberts.

With visual homages to H.G. Wells' The Time Machine, James Whale's 1931 Frankenstein, King Arthur's sword in the stone and Flash Gordon's fashion sense, Doctor Who is an overwrought but often diverting jumble of baffling exposition and dazzling action.

Those seeking deeper meanings should relax. This just signifies that Fox, having failed repeatedly to find a fantasy compatible with the popular X-Files, hopes to cash in on a brand-name. As such, the doctor is more of a Why-Not.