Doctor Who on quiffs, fame and why time travellers don't take the Tube 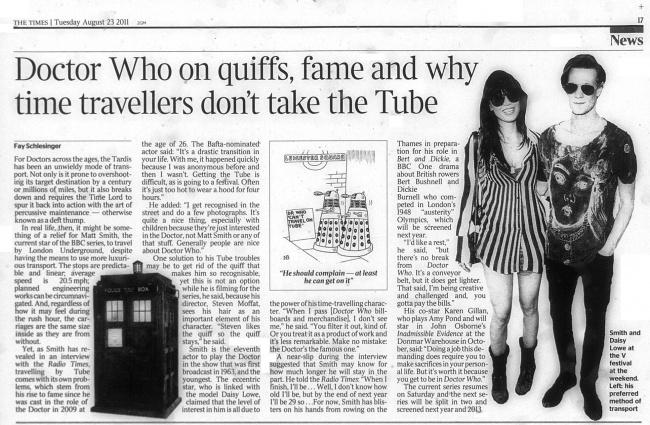 For Doctors across the ages, the Tardis has been an unwieldy mode of transport. Not only is it prone to overshooting its target destination by a century or millions of miles, but it also breaks down and requires the Time Lord to spur it back into action with the art of percussive maintenance — otherwise known as a deft thump.

In real life, then, it might be something of a relief for Matt Smith, the current star of the BBC series, to travel by London Underground, despite having the means to use more luxurious transport. The stops are predictable and linear, average speed is 20.5 mph; planned engineering works can be circumnavigated. And, regardless of how it may feel during the rush hour, the carriages are the same size inside as they are from without

Yet, as Smith has revealed in an interview with the Radio Times, travelling by Tube comes with its own problems, which stem from his rise to fame since he was cast in the role of the Doctor in 2009 at the age of 26. The Bafta-nominated actor said: "It's a drastic transition in your life. With me, it happened quickly because I was anonymous before and then I wasn't. Getting the Tube is difficult, as is going to a festival. Often it's just too hot to wear a hood for four hours."

He added: "I get recognised in the street and do a few photographs. It's quite a nice thing, especially with children because they're just interested in the Doctor, not Matt Smith or any of that stuff. Generally people are nice about Doctor Who."

One solution to his Tube troubles may be to get rid of the quiff that makes him so recognisable, yet this is not an option while he is filming for the series, he said, because his director, Steven Moffat, sees his hair as an important element of his character. "Steven likes the quiff so the quiff stays," he said.

Smith is the eleventh actor to play the Doctor in the show that was first broadcast in 1963, and the youngest. The eccentric star, who is linked with the model Daisy Lowe, claimed that the level of interest in him is all due to the power of his time-travelling character. "When I pass [Doctor Who billboards and merchandise), I don't see me," he said. "You filter it out, kind of. Or you treat it as a product of work and it's less remarkable. Make no mistake: the Doctor's the famous one."

A near-slip during the interview suggested that Smith may know for how much longer he will stay in the part. He told the Radio Times: "When I finish, I'll be ... Well, I don't know how old I'll be, but by the end of next year I'll be 29 so ...For now, Smith has blisters on his hands from rowing on the Thames in preparation for his role in Bert and Dickie, a BBC One drama about British rowers Bert Bushnell and Dickie Burnell who competed in London's 1948 "austerity" Olympics, which will be screened next year.

"I'd like a rest," he said, "but there's no break from Doctor Who. It's a conveyor belt, but it does get lighter. That said, I'm being creative and challenged and, you gotta pay the bills."

His co-star Karen Gillan, who plays Amy Pond and will star in John Osborne's Inadmissible Evidence at the Donmar Warehouse in October, said: "Doing a job this demanding does require you to make sacrifices in your personal life. But it's worth it because you get to be in Doctor Who."

The current series resumes on Saturday and the next series will be split in two and screened next year and 2013.

Caption: Smith and Daisy Lowe at the V festival at the weekend. Left: his preferred method of transport

Dr Who can't travel on Tube

"He should complain — at least he can get on it"