Doctor in at Sci Fi 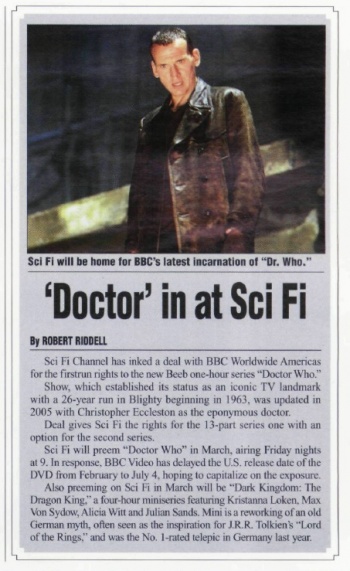 Sci Fi Channel has inked a deal with BBC Worldwide Americas for the firstrun rights to the new Beeb one-hour series "Doctor Who."

Show, which established its status as an iconic TV landmark with a 26-year run in Blighty beginning in 1963, was updated in 2005 with Christopher Eccleston as the eponymous doctor.

Deal gives Sci Fi the rights for the 13-part series one with an option for the second series.

Sci Fi will preem "Doctor Who" in March, airing Friday nights at 9. In response, BBC Video has delayed the U.S. release date of the DVD from February to July 4, hoping to capitalize on the exposure.

Also preeming on Sci Fi in March will be "Dark Kingdom: The Dragon King," a four-hour miniseries featuring Kristanna Loken. Max Von Sydow, Alicia Win and Julian Sands. Mini is a reworking of an old German myth, often seen as the inspiration for J.R.R. Tolkien's "Lord of the Rings," and was the No. 1-rated telepic in Germany last year.

Caption: SCI FI will be home for BBC's latest incarnation of "Dr. Who."