Double Delight For Dr Who Fans 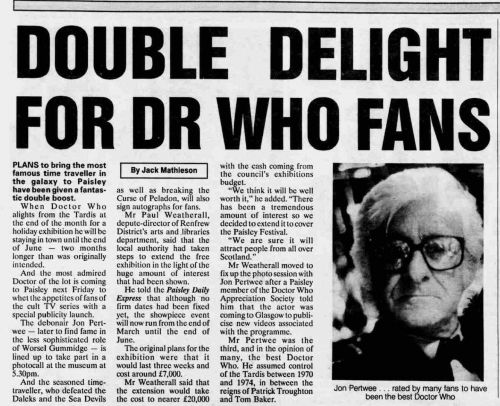 PLANS to bring the most famous time traveller in the galaxy to Paisley have been given a fantastic double boost.

When Doctor Who alights from the Tardis at the end of the month for a holiday exhibition he will be staying in town until the end of June — two months longer than was originally intended.

And the most admired Doctor of the lot is coming to Paisley next Friday to whet the appetites of fans of the cult TV series with a special publicity launch. The debonair Jon Pert-wee — later to find fame in the less sophisticated role of Worsel Gummidge — is lined up to take part in a photocall at the museum at 5.30pm.

And the seasoned time-traveller, who defeated the Daleks and the Sea Devils as well as breaking the Curse of Peladon, will also sign autographs for fans.

Mr Paul Weatherall, deputy-director of Renfrew District's arts and libraries department, said that the local authority had taken steps to extend the free exhibition in the light of the huge amount of interest that had been shown.

He told the Paisley Daily Express that although no firm dates had been fixed yet, the showpiece event will now run from the end of March until the end of June.

The original plans for the exhibition were that it would last three weeks and cost around £7,000.

Mr Weatherall said that the extension would take the cost to nearer £20,000 with the cash coming from the council's exhibitions budget.

"We think it will be well worth it," he added. "Them has been a tremendous amount of interest so we decided to extend it to cover the Paisley Festival.

"We are sure it will attract people from all over Scotland."

Mr Weatherall moved to fix up the photo session with Jon Pertwee after a Paisley member of the Doctor Who Appreciation Society told him that the actor was coming to Glasgow to publicise new videos associated with the programme.

Mr Pcrtwee was the third, and in the opinion of many, the best Doctor Who. He assumed control of the Tardis between 1970 and 1974, in between the reigns of Patrick Troughton and Tom Baker.

Caption: Jon Pertwee ... rated by many fans to have been the best Doctor Who