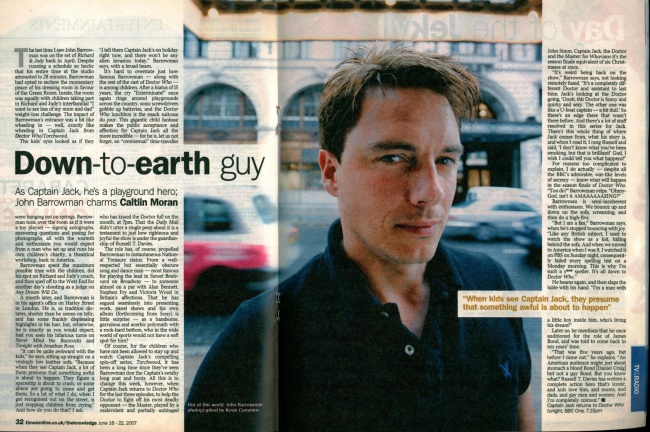 The last time I saw John Barrowman was on the set of Richard & Judy back in April. Despite running a schedule so hectic that his entire time at the studio amounted to 28 minutes, Barrowman had opted to eschew the momentary peace of his dressing room in favour of the Green Room. Inside, the room was squally with children taking part in Richard and Judy's interfamilial "I want to see less of my mum and dad" weight-loss challenge. The impact of Barrowman's entrance was a bit like wheeling in — well, exactly like wheeling in Captain Jack from Doctor Who/Torchwood.

The kids' eyes looked as if they were hanging out on springs. Barrow-man took over the room as if it were a toy playset — signing autographs, answering questions and posing for photographs, all with the warmth and enthusiasm you would expect from a man who set up and runs his own children's charity, a theatrical workshop. back in America.

Barrowman spent the maximum possible time with the children, did his spot on Richard and Judy's couch, and then sped off to the West End for another day's shooting as a judge on Any Dream Will Do.

A month later, and Barrowman is in his agent's office on Harley Street in London. He is, as tradition dictates, shorter than he seems on telly, and has some frankly displeasing highlights in his hair, but, otherwise, he is exactly as you would expect, had you seen his hilarious turns on Never Mind the Buzzcocks and Tonight with Jonathan Ross.

"It can be quite awkward with the kids," he says, sitting up straight on a vexingly low leather sofa. "Because when they see Captain Jack, a lot of them presume that something awful is about to happen. They figure a spaceship is about to crash, or some aliens are going to come and get them. So a lot of what I do, when I get recognised out on the street, is just stopping children from crying." And how do you do that? I ask. "I tell them Captain Jack's on holiday right now, and there won't be any alien invasion today," Barrowman says, with a broad beam.

It's hard to overstate just how famous Barrowman — along with the rest of the cast of Doctor Who — is among children. After a hiatus of 15 years, the cry "Exterminate!" once again rings around playgrounds across the country, sonic screwdrivers gobble up batteries, and the Doctor Who lunchbox is the snack suitcase du jour. This gigantic child fanbase makes the public acceptance and affection for Captain Jack all the more incredible — for he is, let us not forget, an "omnisexual" time-traveller who has kissed the Doctor full on the mouth, at 7pm. That the Daily Mail didn't utter a single peep about it is a testament to just how righteous and joyful the show is under the guardianship of Russell T. Davies.

The role has, of course, propelled Barrowman to instantaneous National Treasure status. From a well-respected but essentially obscure song and dance man — most famous for playing the lead in Sunset Boulevard on Broadway — to someone almost on a par with Alan Bennett, Stephen Fry and Victoria Wood in Britain's affections. That he has segued seamlessly into presenting work, panel shows and his own album (forthcoming from Sony) is little surprise — as a handsome, garrulous and acerbic polymath with a rock-hard bottom, who in the wide world of sports would not have a soft spot for him?

Of course, for the children who have not been allowed to stay up and watch Captain Jack's compelling spin-off series, Torchwood, it has been a long time since they've seen Barrowman don the Captain's swishy long coat and boots. All this is to change this week, however, when Captain Jack returns to Doctor Who for the last three episodes, to help the Doctor to fight off his most deadly opponent — the Master, played by a malevolent and partially unhinged John Simm. Captain Jack, the Doctor and the Master. for Whovians it's the season finale equivalent of six Christmases at once.

"It's weird being back on the show," Barrowman says, not looking remotely fazed. "It's a completely different Doctor and assistant to last time. Jack's looking at the Doctor going, 'Oooh, this Doctor is funny and quirky and sexy. The other one was like a U-boat captain — a bit dull.' So there's an edge there that wasn't there before. And there's a lot of stuff resolved in this series for Jack. There's this whole thing of where Jack comes from, what his story is, and when I read it, I rang Russell and said, 'I don't know what you've been smoking, but that is brilliant!' God, I wish I could tell you what happens!"

For reasons too complicated to explain, I do actually — despite all the BBC's admirable. war-like levels of secrecy — know what will happen in the season finale of Doctor Who. "You do?" Barrowman yelps. "OhmyGod, isn't it AMAAAAAAZING?"

Barrowman is semi-incoherent with enthusiasm. We bounce up and down on the sofa, screaming, and then do a high-five.

"But I am a fan," Barrowman says, when he's stopped bouncing with joy. "Like any British subject, I used to watch the show as a kid, hiding behind the sofa. And when we moved to America when I was 8, I watched it on PBS on Sunday night, consequently failed every spelling test on a Monday morning. This is why I'm such a s*** speller. It's all down to Doctor Who."

He beams again, and then slaps the table with his hand. "I'm a man with a little boy inside him, who's living his dream!"

Later on he mentions that he once auditioned for the role of James Bond, and was told to come back in ten years' time.

"That was five years ago, but before I came out," he explains. "An American audience might just about stomach a blond Bond [Daniel Craig] but not a gay Bond. But you know what? Russell T. Davies has written a complete action hero that's iconic, and kids love him, and mums, and dads, and gay men and women. And I'm completely content."

Captain Jack returns to Doctor Who tonight, BBC One, 7.15pm

Out of this world: John Barrowman, photographed by Kevin Cummins