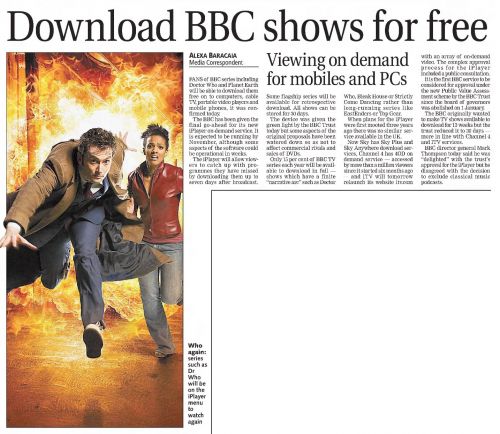 Viewing on demand for mobiles and PCs

FANS of BBC series including Doctor Who and Planet Earth will be able to download them free on to computers, cable TV, portable video players and mobile phones, it was confirmed today.

The BBC has been given the final go-ahead for its new iPlayer on-demand service. It is expected to be running by November, although some aspects of the software could be operational in weeks.

The iPlayer will allow viewers to catch up with programmes they have missed by downloading them up to seven days after broadcast.

Some flagship series will be available for retrospective download. All shows can be stored for 30 days.

The device was given the green light by the BBC Trust today but some aspects of the original proposals have been watered down so as not to affect commercial rivals and sales of DVDs.

Only 15 per cent of BBC TV series each year will be available to download in full shows which have a finite "narrative arc" such as Doctor Who, Bleak House or Strictly Come Dancing rather than long-running series like EastEnders or Top Gear.

When plans for the iPlayer were first mooted three years ago there was no similar service available in the UK.

Now Sky has Sky Plus and Sky Anywhere download services, Channel 4 has 40D on demand service — accessed by more than a million viewers since it started six months ago and ITV will tomorrow relaunch its website itv.com with an array of on-demand video. The complex approval process for the iPlayer included a public consultation. It is the first BBC service to be considered for approval under the new Public Value Assessment scheme by the BBC Trust since the board of governors was abolished on 1 January. The BBC originally wanted to make TV shows available to download for 13 weeks but the trust reduced it to 30 days more in line with Channel 4 and ITV services.

BBC director general Mark Thompson today said he was "delighted" with the trust's approval for the iPlayer but he disagreed with the decision to exclude classical music podcasts.

Caption: Who again: series such as Dr Who will be on the iPlayer menu to watch again