Dr. Who and Co top the toy charts 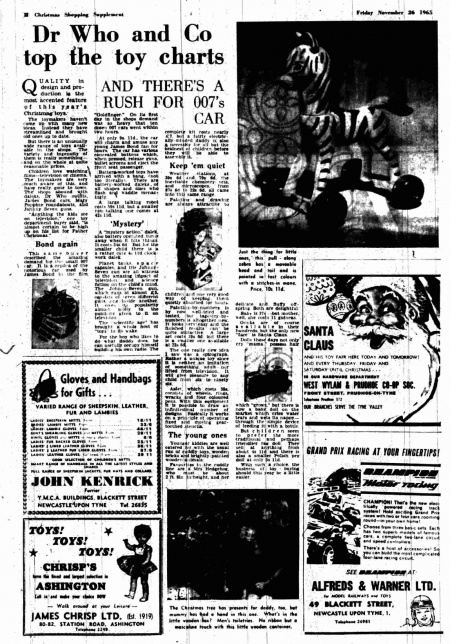 Quality and design and production is the most accented feature of this year's Christmas toys.

The toy makers haven't come up with many new ideas. Instead they have streamlined and brought old ones up to date.

But there is an unusually wide range of toys available in the shops. The variety and ingenuity of them is really something - and on the whole at quite reasonable prices.

Children love watching films - television or cinema. The toy makers are very much aware of this, and have really gone into town. The shops abound with daleks, Dr. Who outfits, James Bond cars, Mary Poppins roundabouts, and Johnny Seven guns.

Anything the kids see on television, one toy department buyer said, is almost certain to be high up on his list for Father Christmas.

The same buyer described the amazing demand for the small 007 car. It is a replica of the notorious car used by James Bond in the film "Goldfinger.". On its first day in the shops demand was so heavy that 10 dozen 007 cars went within two hours.

At only 9s. 11d., the car will charm and amuse any young James Bond fan for hours. The car has various conceal buttons which, when pressed, release guns, bullets screens and eject the front seat passenger.

Battery-worked toys have arrived with a bang (not too literally). There are battery-worked daleks of all shapes and sizes who flash and waddle menacingly.

A mystery action Dalek, also battery operated turns away when it hits that is. It costs 346. But for the smaller child there is a rather queued for 11 clockwork Dalek.

Planet tanks, space capsules , and the Johnny Seven gone are all witness to the amazing impact of television and science fiction On the child's mind. The Johnny seven gun which runs at almost 5 pounds consists of even been different guns, One inside another. It goes its popularity almost solely to the publicity given to it on television.

The scientific age has brought a whole host of toys in its wake.

For the boy who likes to do what daddy does, he can usually occupy himself building his own radio. The complete kit cost nearly 7 pounds but a ferry all electric Klein minded daddy is also necessary for all but the brainiest of children before they will be able to assemble it.

Weather stations at 39s 6d and 79s 6d, the inevitable chemistry sets, and microscopes, from 37s 6d to 22s 6d, all came into this same range.

Painting and drawing are always attractive to children and one very good way of keeping them quietly absorbed for hours.

Painting-by-numbers is by now well-tried and tested, but tapestry-by-numbers is altogether new. It looks very easy and the finished results can be quite attractive. A large set at cost 39s 6d but there is a smaller one available at 22s 6d.

The one really new idea I saw that was a spirograph. Rather a unique toy since it is neither an imitation of something adult nor lifted from television. It will give pleasure to any child from six to ninety six.

Asset, which costs 35s, consists of wheels, rings, racks and four colored pens. With this equipment is possible to draw an infinitesimal number of designs. Basically works on the principle of operating fixed and moving gear-toothed sencils.

Younger kiddies are well catered for with the usual run of cuddly toys, wood and bricks and brightly-painted wooden animals.

Favorites in the cuddly line are in Mrs. Hedgehog, who must be about 2ft. 6in in height, and her delicate and fluffy offspring. Both are delightful.

Gonks are of course available in their hundreds, but the only new "face" in Santa Claus.

Dolls these days not only cry "mama," possess hair which "grows," but there is now a baby doll on the market which cries water two years and wets it nappy - through the simple of feeding it with a bottle.

But children seem to prefer the more traditional and perhaps friendlier rag doll. They sell it anything from about 4s 11d and there is also a smaller Polish and paid doll and only 3s 11d.

With such a choice, the business of toy-buying should This year be a little easier.

Caption: Just the thing for little ones, this pull-along zebra has a movable head and tail and is painted in fast colours with stitches-in mane. Price, 10s 11d.

Caption: The Christmas tree has presence for daddy, too, but money has had a hand in this one. What's in the little wooden box? Men's toiletries. No Britain but a masculine touch with this little wooden container.