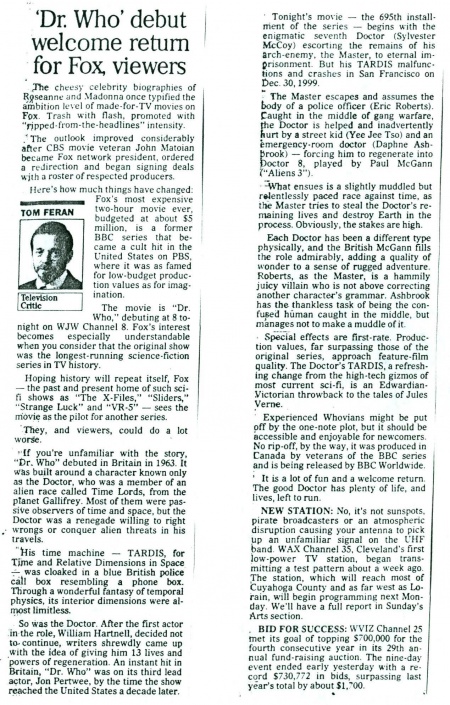 The cheesy celebrity biographies of Roseanne and Madonna once typified the ambition level of made-for-TV movies on Fox. Trash with flash, promoted with "ripped-from-the-headlines" intensity.

Here's how much things have changed: Fox's most expensive two-hour movie ever, budgeted at about $5 million, is a former BBC series that became a cult hit in the United States on PBS, where it was as famed for low-budget production values as for imagination.

The movie is "Dr. Who," debuting at 8 tonight on WJW Channel 8. Fox's interest becomes especially understandable when you consider that the original show was the longest-running science-fiction series in TV history.

Hoping history will repeat itself, Fox — the past and present home of such sci-fi shows as "The X-Files," "Sliders," "Strange Luck" and "VR-5" — sees the movie as the pilot for another series.

They, and viewers, could do a lot worse.

If you're unfamiliar with the story, "Dr, Who" debuted in Britain in 1963. It was built around a character known only as the Doctor, who was a member of an alien race called Time Lords, from the planet Gallifrey. Most of them were passive observers of time and space, but the Doctor was a renegade willing to right wrongs or conquer alien threats in his travels.

His time machine — TARDIS, for Time and Relative Dimensions in Space was cloaked in a blue British police call box resembling a phone box. Through a wonderful fantasy of temporal physics, its interior dimensions were almost limitless.

So was the Doctor. After the first actor in the role, William Hartnell, decided not to continue, writers shrewdly came up with the idea of giving him 13 lives and powers of regeneration. An instant hit in Britain, "Dr. Who" was on its third lead actor, Jon Pertwee, by the time the show reached the United States a decade later. Tonight's movie — the 695th installment of the series — begins with the enigmatic seventh Doctor (Sylvester McCoy) escorting the remains of his arch-enemy, the Master, to eternal imprisonment. But his TARDIS malfunctions and crashes in San Francisco on Dec. 30, 1999.

The Master escapes and assumes the body of a police officer (Eric Roberts), caught in the middle of gang warfare, the Doctor is helped and inadvertently hurt by a street kid (Yee Jee Tso) and an emergency-room doctor (Daphne Ashbrook) — forcing him to regenerate into Doctor 8, played by Paul McGann ("Aliens 3").

What ensues is a slightly muddled but relentlessly paced race against time, as the Master tries to steal the Doctor's remaining lives and destroy Earth in the process. Obviously, the stakes are high.

Each Doctor has been a different type physically, and the British McGann fills the role admirably, adding a quality of wonder to a sense of rugged adventure. Roberts, as the Master, is a hammily juicy villain who is not above correcting another character's grammar. Ashbrook has the thankless task of being the confused human caught in the middle, but manages not to make a muddle of it.

Special effects are first-rate. Production values, far surpassing those of the original series, approach feature-film quality. The Doctor's TARDIS, a refreshing change from the high-tech gizmos of most current sci-fi, is an Edwardian-Victorian throwback to the tales of Jules Verne.

Experienced Whovians might be put off by the one-note plot, but it should be accessible and enjoyable for newcomers. No rip-off, by the way, it was produced in Canada by veterans of the BBC series and is being released by BBC Worldwide.

It is a lot of fun and a welcome return. The good Doctor has plenty of life, and lives, left to run.