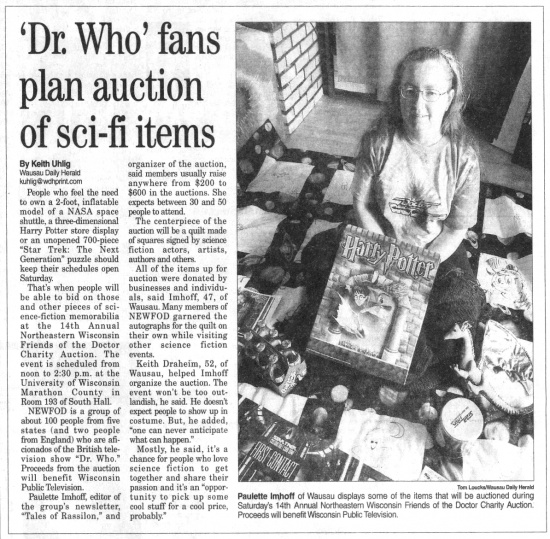 People who feel the need to own a 2-foot, inflatable model of a NASA space shuttle, a three-dimensional Harry Potter store display or an unopened 700-piece "Star Trek: The Next Generation" puzzle should keep their schedules open Saturday.

That's when people will be able to bid on those and other pieces of science-fiction memorabilia at the 14th Annual Northeastern Wisconsin Friends of the Doctor Charity Auction. The event is scheduled from noon to 2:30 p.m. at the University of Wisconsin Marathon County in Room 193 of South Hall.

NEWFOD is a group of about 100 people from five states (and two people from England) who are aficionados of the British television show "Dr. Who." Proceeds from the auction will benefit Wisconsin Public Television.

Paulette Imhoff, editor of the group's newsletter, "Tales of Rassilon," and organizer of the auction, said members usually raise anywhere from $200 to $600 in the auctions. She expects between 30 and 50 people to attend.

The centerpiece of the auction will be a quilt made of squares signed by science fiction actors, artists, authors and others.

All of the items up for auction were donated by businesses and individuals, said Imhoff, 47, of Wausau. Many members of NEWFOD garnered the autographs for the quilt on their own while visiting other science fiction events.

Keith Draheim, 52, of Wausau, helped Imhoff organize the auction. The event won't be too outlandish, he said. He doesn't expect people to show up in costume. But, he added, "one can never anticipate what can happen."

Mostly, he said, it's a chance for people who love science fiction to get together and share their passion and it's an "opportunity to pick up some cool stuff for a cool price, probably"

Caption: Paulette Imhoff of Wausau displays some of the items that will be auctioned during Saturdays 14th Annual Northeastern Wisconsin Friends of the Doctor Charity Auction. Proceeds will benefit Wisconsin Public Television.