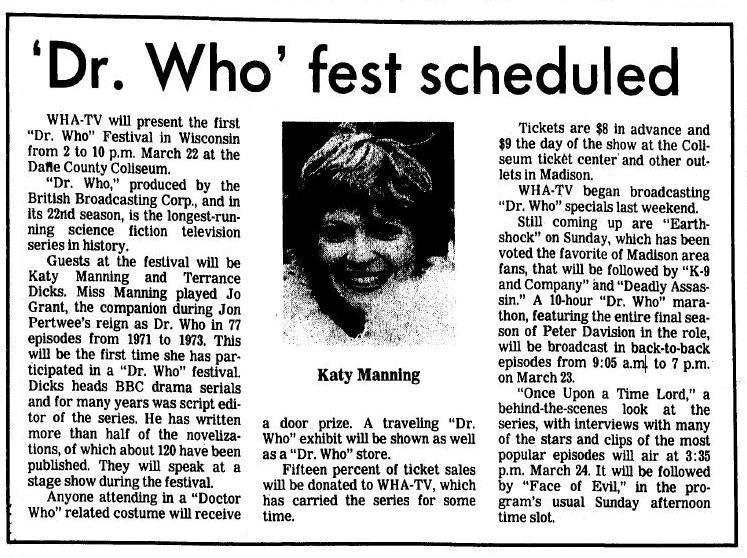 WHA-TV will present the first "Dr. Who" Festival in Wisconsin from 2 to 10 p.m. March 22 at the Dante County Coliseum.

"Dr. Who," produced by the British Broadcasting Corp., and in its 22nd season, is the longest-running science fiction television series in history.

Guests at the festival will be Katy Manning and Terrance Dicks. Miss Manning played Jo Grant, the companion during Jon Pertwee's reign as Dr. Who in 77 episodes from 1971 to 1973, This will be the first time she has participated in a "Dr. Who" festival. Dicks heads BBC drama serials and for many years was script editor of the series. He has written more than half of the novelizations, of which about 120 have been published. They will speak at a stage show during the festival.

Anyone attending in a "Doctor Who" related costume will receive a door prize. A traveling "Dr. Who" exhibit will be shown as well as a "Dr. Who" store.

Fifteen percent of ticket sales will be donated to WHA-TV, which has carried the series for some time.

Tickets are $8 in advance and $9 the day of the show at the Coliseum ticket center and other outlets In Madison.

Still coming up are "Earthshock" on Sunday, which has been voted the favorite of Madison area fans, that will be followed by "K-9 and Company" and "Deadly Assassin." A 10-hour "Dr. Who" marathon, featuring the entire final season of Peter Davision in the role, will be broadcast in back-to-back episodes from 9:05 a.mi to 7 p.m. on March 23.

"Once Upon a Time Lord," a behind-the-scenes look at the series, with interviews with many of the stars and clips of the most popular episodes will air at 3:35 p.m. March 24. It will be followed by "The Face of Evil," in the program's usual Sunday afternoon time slot.