Dr. Who replaced by 'The Avengers' 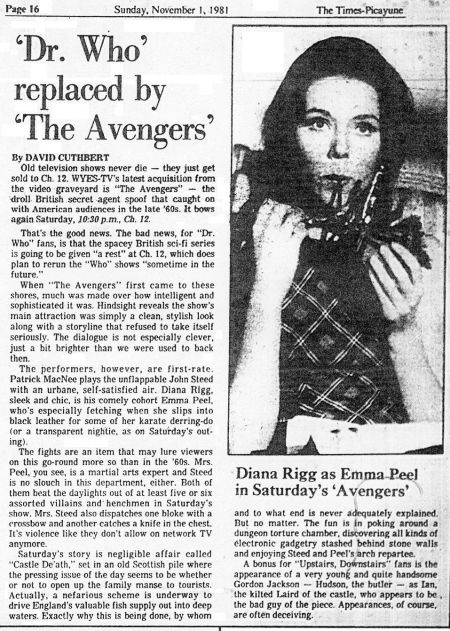 Old television shows never die — they just get sold to Ch. 12. WYES-TV's latest acquisition from the video graveyard is "The Avengers" — the 'droll. British secret agent spoof that caught on with American audiences in the late '60s. It bows again Saturday, 10:30 p.m., Ch. 12.

That's the good news. The bad news, for "Dr. Who" fans, is that the spacey British sci-fi series is going to be given "a rest" at Ch. 12, which does plan to rerun the "Who" shows "sometime in the future."

When "The Avengers" first came to these shores, much was made over how intelligent and sophisticated it was. Hindsight reveals the show's main attraction was simply a clean, stylish look along with a storyline that refused to take itself seriously. The dialogue is not especially clever,4 just a bit brighter than we were used to back then.

The performers, however, are first-rate. Patrick MacNee plays the unflappable John Steed with an urbane, self-satisfied air. Diana Rigg, sleek and chic, is his comely cohort Emma Peel, who's especially fetching when she slips into black leather for some of her karate derring-do (or a transparent nightie, as on Saturday's outing).

The fights are an item that may lure viewers on this go-round more so than in the '60s. Mrs. Peel, you see, is a martial arts expert and Steed is no slouch in this department, either. Both of them beat the daylights out of at least five or six assorted villains and' henchmen in Saturday's show. Mrs. Steed also dispatches one bloke with a crossbow and another catches a knife in the chest. It's violence like they don't allow on network TV anymore.

Saturday's story is negligible affair called "Castle De'ath," set in an old Scottish pile where the pressing issue of the day seems to be whether or not to open up the family manse to tourists; Actually„ a nefarious scheme is underway to' drive England's valuable fish supply out into deep waters. Exactly why this is being done, by whom and to what end is never adequately explained. But no matter. The fun is in poking around a dungeon torture chamber, discovering all kinds of electronic gadgetry stashed behind stone walls and enjoying Steed and Peel's arch repartee.

A bonus for "Upstairs, Downstairs" fans is the appearance of a very young and quite handsome Gordon Jackson — Hudson, the butler — as Ian, the kilted Laird of the castle, who appears to be, the bad guy of the piece. Appearances, of course, are often deceiving.