Dr Hype and not a Dalek in sight 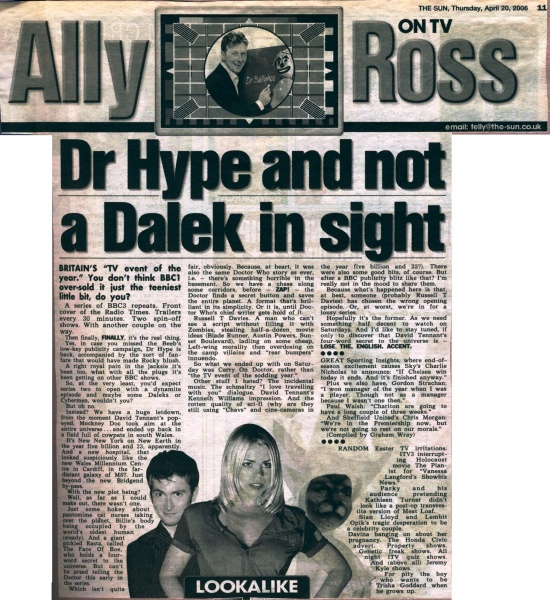 BRITAIN'S "TV event of the year." You don't think BBC1 over-sold it just the teeniest little bit, do you?

A series of BBC3 repeats. Front cover of the Radio Times. Trailers every 30 minutes. Two spin-off shows. With another couple on the way.

Then finally, FINALLY, it's the real thing. Yes, in case you missed the Beeb's low-key publicity campaign, Dr Hype is back, accompanied by the sort of fanfare that would have made Rocky blush. A right royal pain in the jacksie it's been too, what with all the plugs it's been getting on other BBC shows. So, at the very least, you'd expect series two to open with a dynamite episode and maybe some Daleks or Cybermen, wouldn't you?

Instead? We have a huge letdown, from the moment David Tennant's popeyed. Mockney Doc took aim at the entire universe ... and ended up back in a field full of cowpats in south Wales.

It's New New York on New Earth in the year five billion and 23. apparently. And a new hospital, that looked suspiciously like the new Wales Millennium Centre in Cardiff, in the far-distant galaxy of M87. Just beyond the new Bridgend by-pass.

With the new plot being? Well, as far as I could make out, there wasn't one. Just some hokey about pantomime cat nurses taking over the planet, Billie's body being occupied by the world's oldest human (steady). And a giant pickled Rasta, called The Face Of Boe, who holds a four-word secret to the universe. But can't be arsed telling the Doctor this early in the series.

Which isn't quite fair, obviously. Because, at heart, it was also the same Doctor Who story as ever, i.e. — there's something horrible in the basement. So we have a chase along some corridors, before — ZAP! — the Doctor finds a secret button and saves the entire planet. A format that's brilliant in its simplicity. Or it is, until Doctor Who's chief writer gets hold of it.

So what we ended up with on Saturday was Carry On Doctor, rather than "the TV event of the sodding year."

Other stuff I hated? The incidental music. The schmaltzy "I love travelling with you" dialogue. David Tennant's Kenneth Williams impression. And the rotten quality of sci-fi (why are they still using "Chays" and cine-cameras in the year five billion and 23?). There were also some good bits, of course. But after a BBC publicity blitz like that? I'm really not in the mood to share them. Because what's happened here is that, at best, someone (probably Russell T Davies) has chosen the wrong opening episode. Or, at worst, we're in for a lousy series.

Hopefully it's the former. As we need something half decent to watch on Saturdays. And I'd like to stay tuned, if only to discover that David Tennant's four-word secret to the universe is —LOSE. THE. ENGLISH. ACCENT.