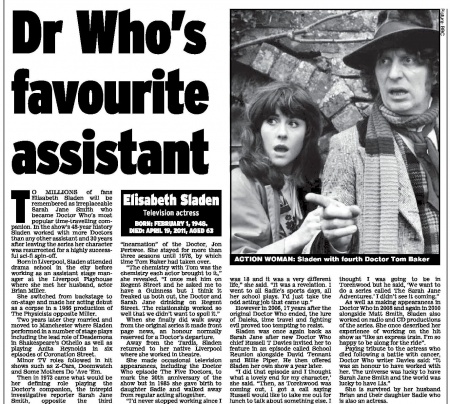 TO MILLIONS of fans Elisabeth Sladen will be remembered as irreplaceable Sarah Jane Smith who became Doctor Who's most popular time-travelling companion. In the show's 48-year history Sladen worked with more Doctors than any other assistant and 30 years after leaving the series her character was resurrected for a highly successful sci-fi spin-off.

Born in Liverpool, Sladen attended drama school in the city before working as an assistant stage manager at the Liverpool Playhouse where she met her husband, actor Brian Miller.

She switched from backstage to on-stage and made her acting debut as a corpse in a 1966 production of The Physicists opposite Miller.

Two years later they married and moved to Manchester where Sladen performed in a number of stage plays including the lead role of Desdemona in Shakespeare's Othello as well as playing Anita Reynolds in six episodes of Coronation Street.

Minor TV roles followed in hit shows such as Z-Cars, Doomwatch and Some Mothers Do 'Ave 'Em.

Then in 1973 came what would be her defining role playing the Doctor's companion, the intrepid investigative reporter Sarah Jane Smith, opposite the third "incarnation" of the Doctor, Jon Pertwee. She stayed for more than three seasons until 1976, by which time Tom Baker had taken over.

"The chemistry with Tom was the chemistry each actor brought to it," she revealed. "I once met him on Regent Street and he asked me to have a Guinness but I think it freaked us both out, the Doctor and Sarah Jane drinking on Regent Street. The relationship worked so well that we didn't want to spoil it."

When she finally did walk away from the original series it made front page news, an honour normally reserved for a Doctor's departure.

Away from the Tamils, Sladen returned to her native Liverpool where she worked in theatre.

She made occasional television appearances, including the Doctor Who episode The Five Doctors, to mark the 20th anniversary of the show but in 1985 she gave birth to daughter Sadie and walked away from regular acting altogether.

"I'd never stopped working since I was 18 and it was a very different life," she said. "It was a revelation. I went to all Sadie's sports days, all her school plays. I'd just take the odd acting job that came up."

However in 2006, 17 years after the original Doctor Who ended, the lure of Daleks, time travel and fighting evil proved too tempting to resist.

Sladen was once again back as Sarah Jane after new Doctor Who chief Russell T Davies invited her to feature in an episode called School Reunion alongside David Tennant and Billie Piper. He then offered Sladen her own show a year later.

"I did that episode and I thought what a lovely end for my character,' she said. "Then, as Torchwood was coming out, I got a call saying Russell would like to take me out for lunch to talk about something else. I thought I was going to be in Torchwood but he said, 'We want to do a series called The Sarah Jane Adventures.' I didn't see it coming."

As well as making appearances in Doctor Who in 2008 and again in 2010 alongside Matt Smith, Sladen also worked on radio and CD productions of the series. She once described her experience of working on the hit show as "like an express train. I'm so happy to be along for the ride".

Paying tribute to the actress who died following a battle with cancer, Doctor Who writer Davies said: "It was an honour to have worked with her. The universe was lucky to have Sarah Jane Smith and the world was lucky to have Lis."

She is survived by her husband Brian and their daughter Sadie who is also an actress.