Dr Who's girl is her own woman 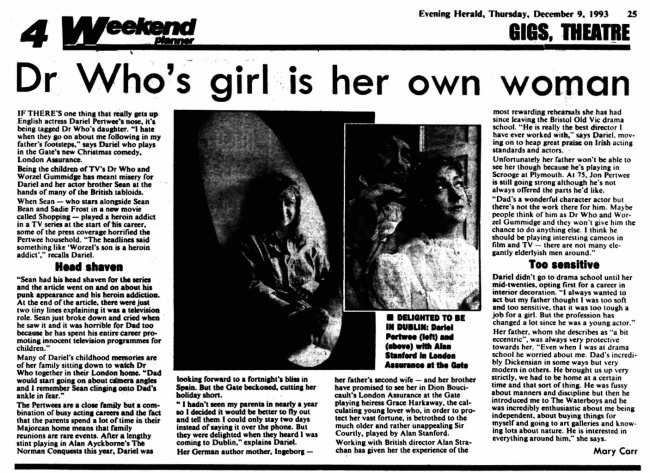 IF THERE'S one thing that really gets up English actress Dariel Peewee's nose, it's being tagged Dr Who's daughter. "I hate when they go on about me following in my father's footsteps," says Dariel who plays in the Gate's new Christmas comedy, London Assurance.

Being the children of TV's Dr Who and Worzel Gummidge has meant misery for Dariel and her actor brother Sean at the hands of many of the British tabloids. When Sean — who stars alongside Sean Bean and Sadie Frost in a new movie called Shopping — played a heroin addict in a TV series at the start of his career, some of the press coverage horrified the Pertwee household. "The headlines said something like 'Worzel's son is a heroin addict'," recalls Dariel.

"Sean had his head shaven for the series and the article went on and on about his punk appearance and his heroin addiction. At the end of the article, there were just two tiny lines explaining it was a television role. Sean just broke down and cried when he saw it and it was horrible for Dad too because he has spent his entire career promoting innocent television programmes for children."

Many of Dariel's childhood memories are of her family sitting down to watch Dr Who together in their London home. "Dad would start going on about camera angles and I remember Sean clinging onto Dad's ankle in fear."

The Pertwees are a close family but a combination of busy acting careers and the fact that the parents spend a lot of time in their Majorcan home means that family reunions are rare events. After a lengthy stint playing in Alan Ayckborne's The Norman Conquests this year, Dariel was looking forward to a fortnight's bliss in Spain. But the Gate beckoned, cutting her holiday short.

"I hadn't seen my parents in nearly a year so I decided it would be better to fly out and tell them I could only stay two days instead of saying it over the phone. But they were delighted when they heard I was coming to Dublin," explains Dariel. Her German author mother, Ingeborg — her father's second wife — and her brother have promised to see her in Dion Boucicault's London Assurance at the Gate playing heiress Grace Harkaway, the calculating young lover who, in order to protect her vast fortune, is betrothed to the much older and rather unappealing Sir Courtly, played by Alan Stanford.

Working with British director Alan Strachan has given her the experience of the most rewarding rehearsals she has had since leaving the Bristol Old Vic drama school. "He is really the best director I have ever worked with,' says Dariel, moving on to heap great praise on Irish acting standards and actors.

Unfortunately her father won't be able to see her though because he's playing in Scrooge at Plymouth. At 75. Jon Pertwee is still going strong although he's not always offered the parts he'd like.

"Dad's a wonderful character actor but there's not the work there for him. Maybe people think of him as Dr Who and Worzel Gummidge and they won't give him the chance to do anything else. I think he should be playing interesting cameos in film and TV — there are not many elegantly elderlyish men around."

Dariel didn't go to drama school until her mid-twenties, opting first for a career in interior decoration. "I always wanted to act but my father thought I was too soft and too sensitive, that it was too tough a job for a girl. But the profession has changed a lot since he was a young actor." Her father. whom she describes as "a bit eccentric", was always very protective towards her. "Even when I was at drama school he worried about me. Dad's incredibly Dickensian in some ways but very modern in others. He brought us up very strictly, we had to be home at a certain time and that sort of thing. He was fussy about manners and discipline but then he introduced me to The Waterboys and he was incredibly enthusiastic about me being independent, about buying things for myself and going to art galleries and knowing lots about nature. He is interested in everything around him," she says.

Caption: DELIGHTED TO BE IN DUBLIN: Dariel Pertwee (left) and (above) with Able Stanford in London Assurances at the Gate