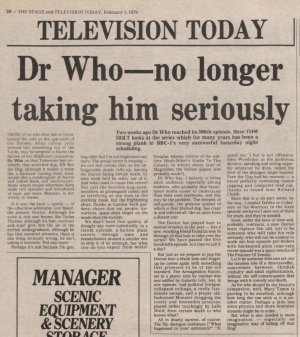 Two weeks ago Dr Who reached its 500th episode. Here TOM HOLT looks at the series which for many years has been a strong plank in BBC-1's very successful Saturday night scheduling.

THOSE of us who first hid in terror behind the sofa at the approach of the Daleks. when colour telly seemed like something out of the Tardis. may be tempted to blame the decline of our childhood companion. On. Who on that Toblerone box-on-wheels. that wretched dog, KR But the Dog, although it makes a noise like a hacksaw cutting sheet steel, speaks like a combination of Jeeves and Jodrell Bank, and resolves problems which would otherwise have made two episodes and introduced at least one more Monster, is not Holly to blamer

It is also the fault — partly — of the otherwise admirable Tom Baker, the present Doctor. Although his voice is rich and booms like Dylan Thomas, although his hair, overcoat and scarf give him the air of the eternal undergraduate, although he has that essential presence. there is e thing seriously wrong: he isn't taking it seriously. Not any more. Perhaps it's lust because I'm getting older but I'm not frightened any more. The actual terror is missing - we can feel certain that, as the unforgettable music rolls up. leaving the Doctor facing certain death, by next week he'll be safely out of it. And what used to cause this terror? Not just the horrible-bug-eyed-monsters, as grotesquely comic and terrifying as the man in the stocking mask, but the frightening ideas; Daleks in London back gardens, chairs that eat people, ice-warriors, space-ships larger on the inside than the outside.

We don't have that quality of thought any more (admittedly in a recent episode, a hollow planet travels through time and rematerialises around a smaller one to strip it of its minerals, but what else do you expect from writer Douglas Adams, creator of the sublime Hitch-Hiker's Guide To The Galaxy, in whose sweet land of Magrathea the hollow planet was probably made?).

Dr Who has, I believe, a rising adult audience, especially among students, who probably find hyperspace maths easier to understand than their own textbooks, and this may be the problem. The element of self-parody, the greatest symbol of which is that dratted dog, has crept in and infected all, like an alien from a distant star.

The Doctor has played host to mental invaders in the past — has a new, mocking friend found its way in through all that hair to take over the series? We have passed the five hundredth episode. Is it time to call it a day?

But just as we prepare to pop the Doctor into a black hole and forget, up he comes again with something that promises to be of the old standard, The Armageddon Factor, set in a planet tor by nuclear war and addled by Galactic telly, has, in one episode, had political intrigue, collapsed ceilings, a really last-minute escape, and a proper old-fashioned monster dragging the lovely princess, played rather touchingly by Lalla Ward, from certain death to who know what?

All in deadly earest, of course. The flip dialogue continues ("What happened to your optimism?" "It opted out.") but is not offensive. John Woodvine, as the ambitious dictator, speaking and acting superbly whatever he does, raised the level of the dialogue single-handed. Even the Dog had his moment — a sound perfectly combining canine yapping and computer read out, thanks to sound man Richard Chubb.

Since this is a six-part series, by the way. I predict Daleks or Cybermen or Ice-Warriors in the sixth episode, we haven't seen any of them for years, and they're needed.

Soon, under the laws of time and, probably, contracts, a new Doctor must replace the old. Let it be someone who will take his role seriously, who will not be content to work out four-episode pot-boilers with hackneyed plots (one very recent episode was space rewrite of The Prisoner of Zenda).

Let it be someone of who can act out the timeless role of a time-traveller, somewhere between childish credulity and adult sophistication, without the self-consciousness that brings with it comedy and death.

As for who should be the Doctor's companion, well, Mary Tamm is proving to be excellent, although how long she can stick at it is another matter. Perhaps a little less astro-physics and more feminine screams might be in order.

But what is also needed is more imagination—especially an imaginative way of killing off that Dog!