Dr Who and the Dialects 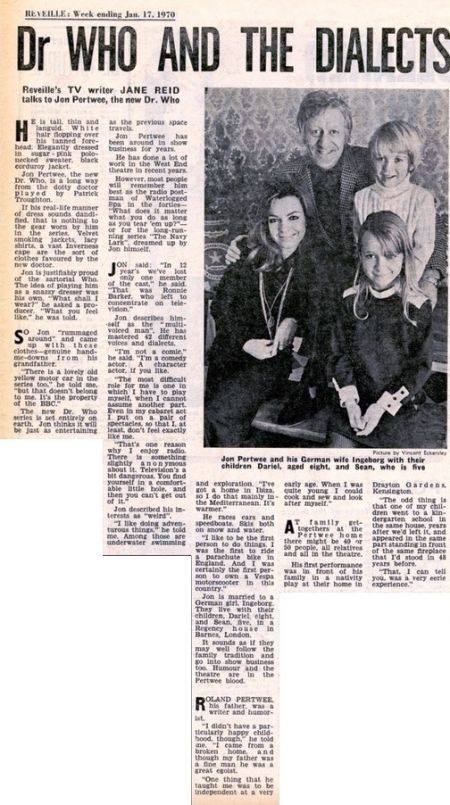 HE is tall, thin and languid. White hair flopping over his tanned fore head. Elegantly dressed in sugar - pink polo

Jon Pertwee, the new Dr. Who is a long way from the dotty doctor played by Patrick Troughton

If his real-life manner of dress sounds dandi fied that is nothing to the rear worn by him in the series. Velvet smoking jackets, lacy cape are the sort of clothes favoured by the new doctor.

Jon is justifiably proud of the sartorial "Who. The idea of playing him as a snazzy dresser was his own. What shall I wear?" he asked a producer. "What you feel like. he was told,

SO Jon "rummaged around" and came up with these clothes-genuine hand-me-downs from this grandfather.

"There is a lovely old yellow motor car in the series too," he told me, "but that doesn't belong to me. It's the property of the BBC."

The new Dr Who series is set entirely on earth, Jon thinks it will be just as entertaining as the previous space travels.

Jon Pertwee has been around in show business for years.

He has done a lot of theatre in recent years.

However, most people best as the radio postman of Waterlocked Spa in the forties "What does it matter as you tear em up or for the long-running series "The Navy Lark", dreamed up by Jon himself.

JON said: "In 12 years we've lost only one member of the cast," he said "That Was Ronnie Barker, who left to concentrate on television."

Jon describes himself as them "multi-voiced man". He has mastered 42 different voices and dialects.

"The most difficult role for me is one in which I have to play myself, when I cannot assume another part. Even in my cabaret act I put on a pair of spectacles, so that I at least, don't feel exactly like me.

"That's one reason why I enjoy radio. There is something slightly anonymous about it. Television's a bit dangerous. You find yourself in a comfort able little hole, and then you can't get out of it."

Jon described his interests as "weird".

"I like doing adventurous thing," he told me. Among those are underwater swimming and exploration. "I've got a home in Ibiza, so I do that mainly in the Mediterranean. It's warmer.

He races ears and Speedboats. Skis both on snow and water.

Jon is married to a German girl, Ingeborg. They live with their children, Dariel, eight, and Sean, five, in a Regency house in Barnes, London,

It sounds as if they may well follow the family tradition and go into show business too. Humour and the theatre are in the Pertwee blood.

ROLAND PERTWEE, his father, was a writer and humorist.

"I didn't have a particularly happy child hood, though, he told me. "I came from a broken home and though my father was a fine man he was a great egoist.

One thing that he taught me was to be independent at a very early age. When I was quite young I could Kensington cook and sew and look after myself."

AT family get togethers at the Pertwee home there might be 40 or 50 people, all relatives and all in the theatre.

His first performance years before was in front of his family in a nativity play at their home in Drayton Gardens.

"The odd thing is that one of my children went to a kindergarten school in the same house, years after we'd tell it, and appeared in the same part standing in front of the same replace that I'd stood in 48 years before.

"That, I can tell you, was a very eerie experience."

Caption: Jon Pertwee and his German wife Ingeborg with their children Dariel, aged eight, and Sean, who is five