Dr Who down to Earth 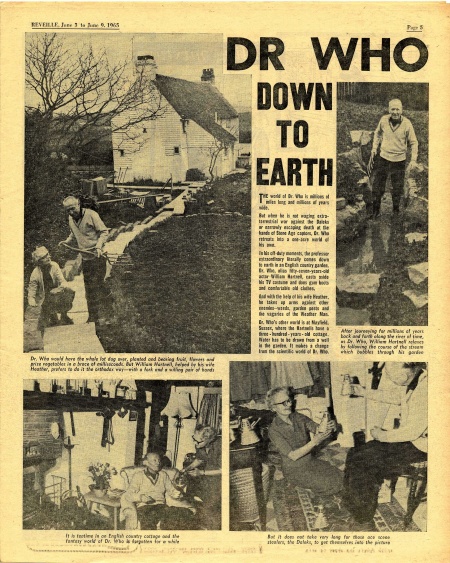 But when he is not waging extraterrestrial war against the Daleks or narrowly escaping death at the hands of Stone Age captors, Dr. Who retreats into a one-acre world of his own.

In his off-duty moments, the professor extraordinary literally comes down to earth in an English country garden. Dr. Who, alias fifty-seven-years-old actor William Hartnell, casts aside his TV costume and dons gum boots and comfortable old clothes.

And with the help of his wife Heather, he takes up arms against other enemies—weeds, garden pests and the vagaries of the Weather Man.

Dr. Who's other world is at Mayfield, Sussex, where the Hartnells have a three-hundred-years-old cottage. Water has to be drawn from a well in the garden. It makes a change from the scientific world of Dr. Who.

Dr. Who would have the whole lot dug over, planted and bearing fruit, flowers and prize vegetables in a brace of milliseconds. But William Hartnell, helped by his wife Heather, prefers to do it the orthodox way—with a fork and a willing pair of hands

After journeying for millions of years back and forth along the river of time, as Dr. Who, William Hartnell relaxes by following the course of the stream which bubbles through his garden

It is teatime in an English country cottage and the fantasy world of Dr. Who is forgotten for a while.

But it does not take very long for those ace scene stealers, the Daleks, to get themselves into the picture.