Dr Who gets Aussie co-star 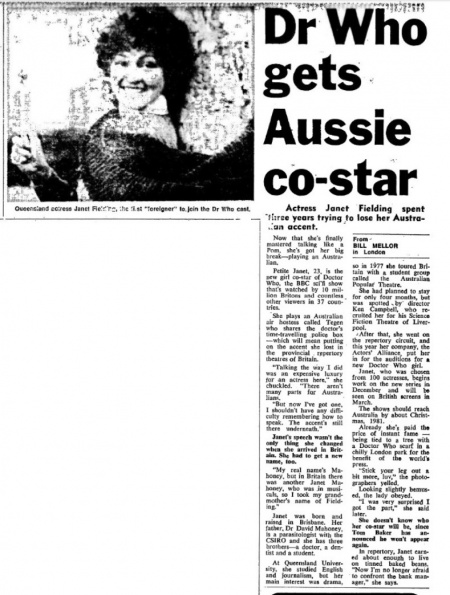 Now that she's finally mastered talking like a Pom she's got her big break—playing an Australian.

Petite Janet, 23, is the new girl co-star of Doctor Who, the BBC sci fi show that's watched by 10 million Britons and countless other viewers in 37 countries.

"Talking the way I did was an expensive luxury for an actress here," she chuckled. "There aren't many parts for Australians.

"But now I've got one, I shouldn't have any difficulty remembering how to speak. The accent's still there underneath."

Janet's speech wasn't the only thing she changed when she arrived la Britain. She had to get a new name, too.

"My real name's Mahoney, but in Britain there was another Janet Mahoney, who was in musicals, so I took my grandmother's name of Fielding.

Janet was born and raised in Brisbane. Her father, Dr David Mahoney, is a parasitologist with the CSIRO and she has three brothers--a doctor, a dentist and a student.

At Queensland University, she studied English and journalism, but her main interest was drama, so in 1977 she toured Britain with a student group called the Australian Popular Theatre.

She had planned to stay for only four months, but was spotted by director Kea Campbell, who recruited her for his Science Fiction Theatre of Liverpool.

After that, she went on the repertory circuit, and this year her company, the Actors' Alliance put her in for the auditions for a new Doctor Who girl. Janet, who was chosen from 300 actresses, begins work on the new series in December and will be seen on British screens in March.

The shows should reach Australia by about Christmas, 1981.

Already she's paid the price of instant fame —being tied to a tree with a Doctor Who scarf in a chilly London park for the benefit of the world's press.

"Stick your leg out a bit more, luv," the photographers yelled.

"I was very surprised I got the part," she said later.

She doesn't know who her co-star will be, since Tom Baker has announced he won't appear again.

In repertory, Janet earned about enough to live on tinned baked beans. 'Now I'm no longer afraid to confront the bank manager," she says.