Dr Who has been exterminated 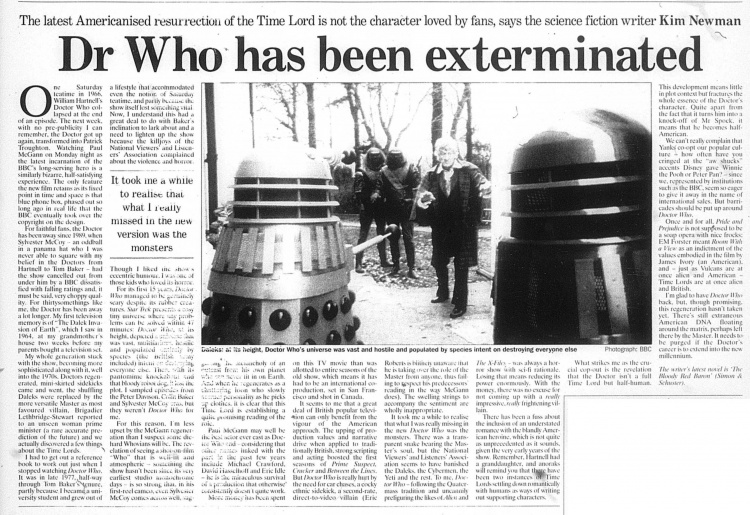 Dr Who has been exterminated; The latest Americanised resurrection of the Time Lord is not the character loved by fans, says the science fiction writer Kim Newman

One Saturday teatime in 1966, William Hartnell's Doctor Who collapsed at the end of an episode. The next week, with no pre-publicity I can remember, the Doctor got up again, transformed into Patrick Troughton. Watching Paul McGann on Monday night as the latest incarnation of the BBC's longserving hero is a similarly bizarre, half-satisfying experience. The only feature the new film retains as its fixed point in time and space is that blue phone box, phased out so long ago in real life that the BBC eventually took over the copyright on the design.

For faithful fans, the Doctor has been away since 1989, when Sylvester McCoy - an oddball in a panama hat who I was never able to square with my belief in the Doctors from Hartnell to Tom Baker - had the show cancelled out from under him by a BBC dissatisfied with falling ratings and, it must be said, very choppy quality. For thirtysomethings like me, the Doctor has been away a lot longer. My first television memory is of "The Dalek Invasion of Earth", which I saw in 1964, at my grandmother's house two weeks before my parents bought a television set.

My whole generation stuck with the show, becoming more sophisticated along with it, well into the 1970s. Doctors regenerated, mini-skirted sidekicks came and went, the shuffling Daleks were replaced by the more versatile Master as most favoured villain, Brigadier Lethbridge-Stewart reported to an unseen woman prime minister (a rare accurate prediction of the future) and we actually discovered a few things about the Time Lords.

I had to get out a reference book to work out just when I stopped watching Doctor Who. It was in late 1977, half-way through Tom Baker's tenure, partly because I became a university student and grew out of a lifestyle that accommodated even the notion of Saturday teatime, and partly because the show itself lost something vital. Now, I understand this had a great deal to do with Baker's inclination to lark about and a need to lighten up the show because the killjoys of the National Viewers' and Listeners' Association complained about the violence and horror. Though I liked the show's eccentric humour, I was one of those kids who loved its horror.

For its first 15 years, Doctor Who managed to be genuinely scary despite its rubber creatures. Star Trek presents a cosy tiny universe where any problems can be solved within 47 minutes; Doctor Who, at its height, depicted a universe that was vast, multifarious, hostile and populated entirely by species (the British army included) intent on destroying everyone else. Then, with its pantomime knockabout and that bloody robot dog, it lost the plot. I sampled episodes from the Peter Davison, Colin Baker and Sylvester McCoy eras, but they weren't Doctor Who for me.

For this reason, I'm less upset by the McGann regeneration than I suspect some die-hard Whovians will be. The revelation of seeing a shot-on-film "Who" that is well-lit and atmospheric - something the show hasn't been since its very earliest studio monochrome days - is so strong that, in his first-reel cameo, even Sylvester McCoy comes across well, suggesting the melancholy of an outcast from his own planet who can never fit in on Earth. And when he regenerates as a chattering loon who slowly accrues personality as he picks up clothes, it is clear that this Time Lord is establishing a quite promising reading of the role.

Paul McGann may well be the best actor ever cast as Doctor Who and - considering that other names linked with the part in the past few years include Michael Crawford, David Hasselhoff and Eric Idle - he is the miraculous survival of a production that otherwise consistently doesn't quite work.

More money has been spent on this TV movie than was allotted to entire seasons of the old show, which means it has had to be an international co-production, set in San Francisco and shot in Canada.

It seems to me that a great deal of British popular television can only benefit from the vigour of the American approach. The upping of production values and narrative drive when applied to traditionally British, strong scripting and acting boosted the first seasons of Prime Suspect, Cracker and Between the Lines. But Doctor Who is really hurt by the need for car chases, a cocky ethnic sidekick, a second-rate, direct-to-video villain (Eric Roberts is blithely unaware that he is taking over the role of the Master from anyone, thus failing to respect his predecessors' reading in the way McGann does). The swelling strings to accompany the sentiment are wholly inappropriate.

It took me a while to realise that what I was really missing in the new Doctor Who was the monsters. There was a transparent snake bearing the Master's soul, but the National Viewers' and Listeners' Association seems to have banished the Daleks, the Cybermen, the Yeti and the rest. To me, Doctor Who - following the Quatermass tradition and uncannily prefiguring the likes of Alien and The X-Files - was always a horror show with scifi rationale. Losing that means reducing its power enormously. With the money, there was no excuse for not coming up with a really impressive, really frightening villain.

There has been a fuss about the inclusion of an understated romance with the blandly American heroine, which is not quite as unprecedented as it sounds, given the very early years of the show. Remember, Hartnell had a granddaughter, and anoraks will remind you that there have been two instances of Time Lords settling down romantically with humans as ways of writing out supporting characters.

What strikes me as the crucial cop-out is the revelation that the Doctor isn't a full Time Lord but half-human. This development means little in plot context but fractures the whole essence of the Doctor's character. Quite apart from the fact that it turns him into a knock-off of Mr Spock, it means that he becomes half-American.

We can't really complain that Yanks co-opt our popular culture - how often have you cringed at the "aw shucks" accents Disney gave Winnie the Pooh or Peter Pan? - since we, represented by institutions such as the BBC, seem so eager to give it away in the name of international sales. But barricades should be put up around Doctor Who.

I'm glad to have Doctor Who back, but, though promising, this regeneration hasn't taken yet. There's still extraneous American DNA floating around the matrix, perhaps left there by the Master. It needs to be purged if the Doctor's career is to extend into the new millennium.