Dr Who travels forward in time 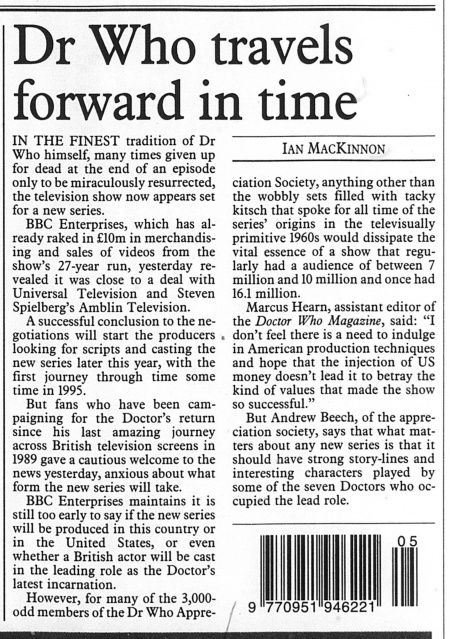 IN THE FINEST tradition of Dr Who himself, many times given up for dead at the end of an episode only to be miraculously resurrected, the television show now appears set for a new series.

BBC Enterprises, which has already raked in £10m in merchandising and sales of videos from the show's 27-year run, yesterday revealed it was close to a deal with Universal Television and Steven Spielberg's Amblin Television.

A successful conclusion to the negotiations will start the producers . looking for scripts and casting the new series later this year, with the first journey through time some time in 1995.

But fans who have been campaigning for the Doctor's return since his last amazing journey across British television screens in 1989 gave a cautious welcome to the news yesterday, anxious about what form the new series will take.

BBC Enterprises maintains it is still too early to say if the new series will be produced in this country or in the United States, or even whether a British actor will be cast in the leading role as the Doctor's latest incarnation.

However, for many of the 3,000-odd members of the Dr Who Appreciation Society, anything other than the wobbly sets filled with tacky kitsch that spoke for all time of the series' origins in the televisually primitive 1960s would dissipate the vital essence of a show that regularly had a audience of between 7 million and 10 million and once had 16.1 million.

Marcus Hearn, assistant editor of the Doctor Who Magazine, said: "I don't feel there is a need to indulge in American production techniques and hope that the injection of US money doesn't lead it to betray the kind of values that made the show so successful."

But Andrew Beech, of the appreciation society, says that what matters about any new series is that it should have strong story-lines and interesting characters played by some of the seven Doctors who occupied the lead role.