Dr Who will not be exterminated 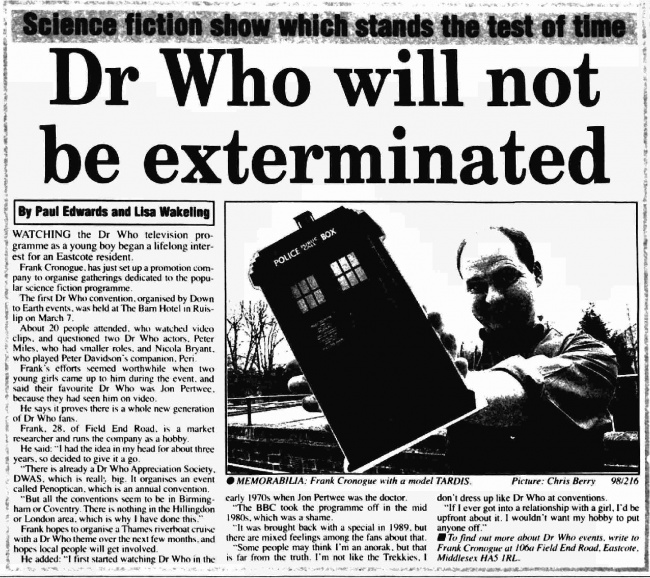 Science fiction show which stands the test of time

WATCHING the Dr Who television programme as a young boy began a lifelong interest for an Eastcote resident.

Frank Cronogue has just set up a promotion corn' pany to organise gatherings dedicated to the popular science fiction programme.

The first Dr Who convention, organised by Down to Earth events, was held at The Barn Hotel in Ruslip on March 7.

Frank's efforts seemed worthwhile when two young girls came up to him during the event and said their favounte Dr Who was Jon Pertwee, because they had seen him on video.

He says it proves there is a whole new generation of Dr Who fans.

Frank, 28, of Field End Road, is a market researcher and runs the company as a hobby.

He said: "I had the idea in my head for about three years, so decided to give it a go.

"There is already a Dr Who Appreciation Society, DWAS, which is really big. It organises an event called Penopticon, which is an annual convention. "But all the conventions seem to be in Birmingham or Coventry. There is nothing in the Hillingdon or London area. which is why I have done this." Frank hopes to organise a Thames riverboat cruise with a Dr Who theme over the next few months, and hopes local people will get involved.

He added "I first started watching Dr Who in the early 1970s when Jon Pertwee was the doctor.

"The BBC took the programme off in the mid 1980s. which was a shame.

"It was brought back with a special on 1989. but there are mixed feelings among the fans about that.

"Some people may think I'm an anorak, but that is far from the truth. I'm not like the Trekkies, I don't dress up like Dr Who at conventions. "If I ever got into a relationship with a girl. I'd be upfront about it. I wouldn't want my hobby to put anyone off."

To find out more about Dr Who events, write to Frank Cronogue at 106a Field End Road, Eastcote, Middlesex HA5 1RL.