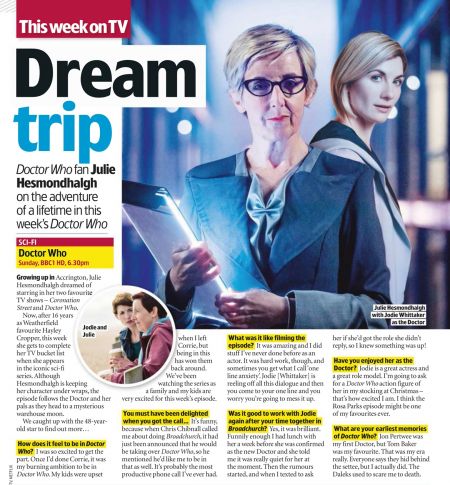 Growing up in Accrington, Julie Hesmondhalgh dreamed of starring in her two favourite TV shows — Coronation Street and Doctor Who.

Now, after 16 years as Weatherfield favourite Hayley Cropper, this week she gets to complete her TV bucket list when she appears in the iconic sci-fi series. Although Hesmondhalgh is keeping her character under wraps, the episode follows the Doctor and her pals as they head to a mysterious warehouse moon.

We caught up with the 48-year-old star to find out more...

How does it feel to be in Doctor Who?

I was so excited to get the part. Once I'd done Corrie, it was my burning ambition to be in Doctor Who. My kids were upset when I left Corrie, but being in this has won them back around. We've been watching the series as a family and my kids are very excited for this week's episode.

You must have been delighted when you got the call...

It's funny, because when Chris Chibnall called me about doing Broadchurch, it had just been announced that he would be taking over Doctor Who, so he mentioned he'd like me to be in that as well. It's probably the most productive phone call I've ever had.

It was amazing and I did stuff I've never done before as an actor. It was hard work, though, and sometimes you get what I call one line anxiety. Jodie [Whittaker] is reeling off all this dialogue and then you come to your one line and you worry you're going to mess it up.

Was it good to work with Jodie again after your time together in Broadchurch?

Yes, it was brilliant. Funnily enough I had lunch with her a week before she was confirmed as the new Doctor and she told me it was really quiet for her at the moment. Then the rumours started, and when I texted to ask her if she'd got the role she didn't reply, so I knew something was up!

Have you enjoyed her as the Doctor?

Jodie is a great actress and a great role model. I'm going to ask for a Doctor Who action figure of her in my stocking at Christmas — that's how excited I am. I think the Rosa Parks episode might be one of my favourites ever.

Jon Pertwee was my first Doctor, but Tom Baker was my favourite. That was my era really. Everyone says they hid behind the settee, but I actually did. The Daleks used to scare me to death.

Caption: Julie Hesmondhalgh with Jodie Whittaker as the Doctor