Eccleston and Billie, just what the Doctor ordered 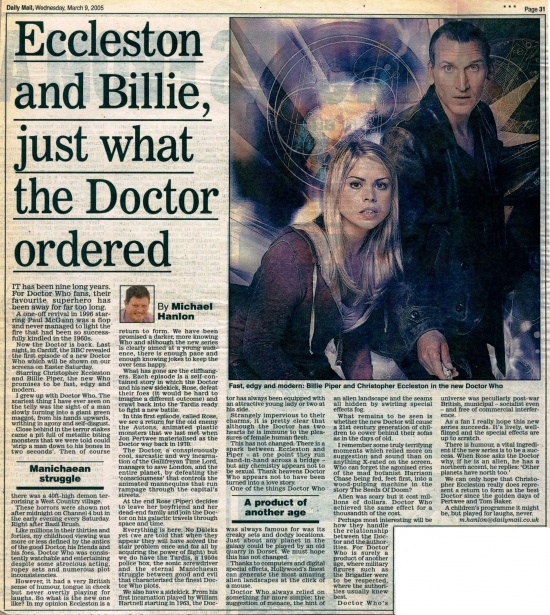 IT has been nine long years. For Doctor Who fans, their favourite superhero has been away for far too long.

A one-off revival in 1996 starring Paul McGann was a flop and never managed to light the fire that had been so successfully kindled in the 1960s.

Now the Doctor is back. Last night, in Cardiff, the BBC revealed the first episode of a new Doctor Who which will be shown on our screens on Easter Saturday.

Starring Christopher Eccleston and Billie Piper, the new Who promises to be fast, edgy and modern.

I grew up with Doctor Who. The scariest thing I have ever seen on the telly was the sight of a man slowly turning into a giant green maggot, from his hands upwards, writhing in agony and self-disgust.

Close behind in the terror stakes came a pit full of metallic biting monsters that we were told could 'strip a man down to his bones in two seconds'. Then of course there was a 40ft-high demon terrorising a West Country village.

These horrors were shown not after midnight on Channel 4 but in the early evening every Saturday.

Like millions in their thirties and forties, my childhood viewing was more or less defined by the antics of the good Doctor, his friends and his foes.

Doctor Who was consistently watchable and entertaining despite some atrocious acting, ropey sets and numerous plot inconsistencies.

However, it had a very British sense of humour, tongue in cheek but never overtly playing for laughs. So what is the new one like? In my opinion Eccleston is a return to form. We have been promised a darker, more knowing Who and although the new series is clearly aimed at a young audience, there is enough pace and enough knowing jokes to keep the over tens happy.

What has gone are the cliffhangers. Each episode is a self-contained story in which the Doctor and his new sidekick, Rose, defeat their foes (it would be hard to imagine a different outcome) and crawl back into the Tardis ready to fight a new battle.

In this first episode, called Rose, we see a return for the old enemy the Autons, animated plastic monsters that we last met when Jon Pertwee materialised as the Doctor way back in 1970.

The Doctor, a conspicuously cool, sarcastic and wry incarnation of the Gallifreyan Time Lord, manages to save London, and the entire planet, by defeating the 'consciousness' that controls the animated mannequins that run rampage through the capital's streets.

At the end Rose (Piper) decides to leave her boyfriend and her dead-end family and join the Doctor on his galactic travels through space and time.

Everything is here. No Daleks yet (we are told that when they appear they will have solved the stair problem once and for all by acquiring the power of flight) but we do have the Tardis, a 1950s police box, the sonic screwdriver and the eternal Manichaean struggle between good and evil that characterised the finest Doctor Who plots.

We also have a sidekick. From his first incarnation played by William Hartnell starting in 1963, the Doctor-has always been equipped with an attractive young lady or two at his side.

Strangely impervious to their charms, it is pretty clear that although the Doctor has two hearts he is immune to the pleasures of female human flesh.

This has not changed. There is a spark between Eccleston and Piper at one point they run hand-in-hand across a bridge but any chemistry appears not to be sexual. Thank heavens Doctor Who appears not to have been turned into a love story.

One of the things Doctor Who was always famous for was its creaky sets and dodgy locations.

Just about any planet in the galaxy could be played by an old quarry in Dorset. We must hope this has not changed.

Thanks to computers and digital special effects, Hollywood's finest can generate the most amazing alien landscapes at the click of a mouse.

Doctor Who always relied on something far more simple: the suggestion of menace, the hint of an alien landscape and the seams all hidden by swirling special effects fog.

What remains to be seen is whether the new Doctor will cause a 21st century generation of children to cower behind their sofas as in the days of old.

I remember some truly terrifying moments which relied more on suggestion and sound than on anything X-rated on the screen.

Who can forget the agonised cries of the mad botanist Harrison Chase being fed, feet first, into a wood-pulping machine in the story The Seeds Of Doom?

Alien was scary but it cost millions of dollars. Doctor Who achieved the same effect for a thousandth of the cost.

Perhaps most interesting will be how they handle the relationship between the Doctor and the authorities. For Doctor Who is surely a product of another age, where military figures such as the Brigadier were to be respected, where the authorities usually knew best.

Doctor Who's universe was peculiarly post-war British, municipal socialist even and free of commercial interference.

As a fan I really hope this new series succeeds. It's lively, well-filmed and the special effects are up to scratch.

There is humour, a vital ingredient if the new series is to be a success.

When Rose asks the Doctor why, if he is an alien, he has a northern accent, he replies: 'Other planets have north too.' We can only hope that Christopher Eccleston really does represent a return to form as the best Doctor since the golden days of Pertwee and Tom Baker.

A children's programme it might be, but played for laughs, never.

GRAPHIC: FAST, EDGY AND MODERN: BILLIE PIPER AND CHRISTOPHER ECCLESTON IN THE NEW DOCTOR WHO