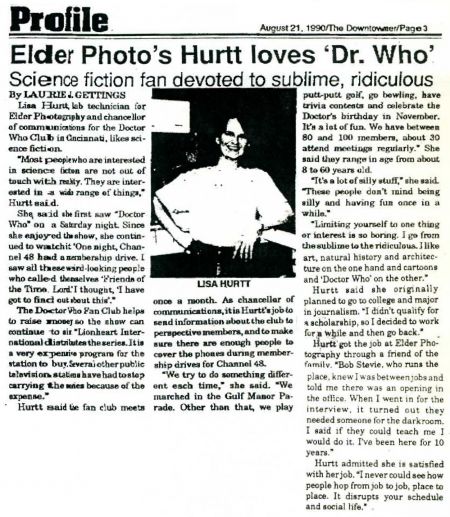 Lisa Hurtt, lab technician for Elder Photography and chancellor of communications for the Doctor Who Club in Cincinnati, likes science fiction.

She said she first saw 'Doctor Who' on a Saturday night. Since she enjoyed the show, she continued to watch it. "One night, Channel 48 hand a membership drive. I saw all these weird-looking people who called themselves 'Friends of the Time Lord." "I thought, 'I have got to find out about this'."

The Doctor Who Fan Club helps to raise money so the show can continue to air. "Lionheart International distributes the series. It is very expensive for the station to buy. Several other public television stations have had to stop carrying the series because of the expense."

Hurtt said he fan club meets once a month. As chancellor of communications, it is Hurtt's job to send information about the club to prospective members, and to make sure there are enough people to cover the phones during membership drives for Channel 48.

"We try to do something different each time," she said "We marched in the Gulf Manor Parade. Other than that, we play putt-putt golf, go bowling, have trivia contests and celebrate the Doctor's birthday in November. It's a lot of fun. We have between 80 and 100 members, about 30 attend meetings regularly.' She said they range in age from about 8 to 60 years old.

"It's a lot of silly stuff," she said. "These people don't mind being silly and having fun once in a while."

"Limiting yourself to one thing or interest is so boring. I go from the sublime to the ridiculous. I like art, natural history and architecture on the one hand and cartoons and 'Doctor Who' on the other."

Hurtt said she originally planned to go to college and major in journalism. 'I didn't qualify for a scholarship, so I decided to work for a while and then go back."

Hurtt got the job at Elder Photography through a friend of the family. "Bob Stevie, who runs the place, knew I was between jobs and told me there was an opening in the office. When I went in for the interview, it turned out they needed someone for the darkroom. I said if they could teach me I would do it. I've been here for 10 years."

Hurtt admitted she is satisfied with her job. "I never could see how people hop from job to job, place to place. It disrupts your schedule and social life."