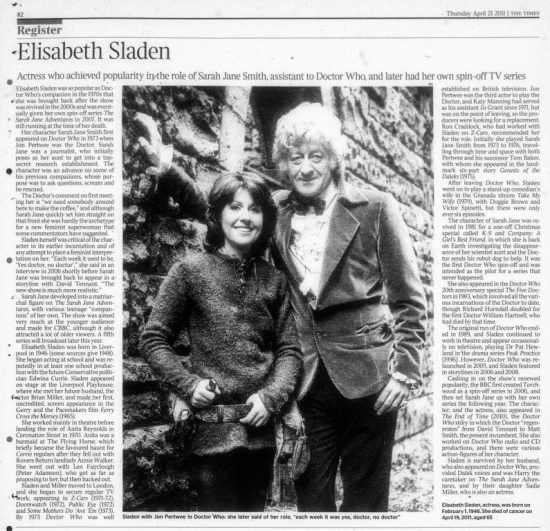 Actress who achieved popularity in the role of Sarah Jane Smith, assistant to Doctor Who, and later had her own spin-off TV series

Elisabeth Sladen was so popular as Doctor Who's companion in the 1970s that she was brought back after the show was revived in the 2000s and was eventually given her own spin-off series The Sarah Jane Adventures in 2007. It was still running at the time of her death.

Her character Sarah Jane Smith first appeared on Doctor Who in 1973 when Jon Pertwee was the Doctor. Sarah Jane was a journalist, who initially poses as her aunt to get into a top-secret research establishment. The character was an advance on some of his previous companions, whose purpose was to ask questions, scream and be rescued.

The Doctor's comment on first meeting her is "we need somebody around here to make the coffee," and although Sarah Jane quickly set him straight on that front she was hardly the archetype for a new feminist superwoman that some commentators have suggested.

Sladen herself was critical of the character in its earlier incarnation and of any attempt to place a feminist interpretation on her. "Each week it used to be, 'Yes doctor, no doctor'," she said in an interview in 2006 shortly before Sarah Jane was brought back to appear in a storyline with David Tennant. "The new show is much more realistic."

Sarah Jane developed into a matriarchal figure on The Sarah Jane Adventures, with various teenage "companions" of her own. The show was aimed very much at the younger audience and made for CBBC, although it also attracted a lot of older viewers. A fifth series will broadcast later this year.

Elisabeth Sladen was born in Liverpool in 1946 (some sources give 1948). She began acting at school and was reputedly in at least one school production with the future Conservative politician Edwina Currie. Sladen appeared on stage at the Liverpool Playhouse, where she met her future husband, the actor Brian Miller, and made her first, uncredited, screen appearance in the Gerry and the Pacemakers film Ferry Cross the Mersey (1965).

She worked mainly in theatre before landing the role of Anita Reynolds in Coronation Street in 1970. Anita was a barmaid at The Flying Horse, which briefly became the favoured haunt for Corrie regulars after they fell out with Rovers Return landlady Annie Walker. She went out with Len Fairclough (Peter Adamson), who got as far as proposing to her, but then backed out.

Sladen and Miller moved to London, and she began to secure regular TV work, appearing in Z-Cars (1971-72), Doomwatch (1972), Public Eye (1972) and Some Mothers Do 'Ave 'Em (1973). By 1973 Doctor Who was well established on British television. Jon Pertwee was the third actor to play the Doctor, and Katy Manning had served as his assistant Jo Grant since 1971, but was on the point of leaving, so the producers were looking for a replacement. Ron Craddock, who had worked with Sladen on Z-Cars, recommended her for the role. Initially she played Sarah Jane Smith from 1973 to 1976, travelling through time and space with both Pertwee and his successor Tom Baker, with whom she appeared in the landmark six-part story Genesis of the Daleks (1975).

After leaving Doctor Who, Sladen went on to play a stand-up comedian's wife in the Granada sitcom Take My Wife (1979), with Duggie Brown and Victor Spinetti, but there were only ever six episodes.

The character of Sarah Jane was revived in 1981 for a one-off Christmas special called K-9 and Company: A Girl's Best Friend, in which she is back on Earth investigating the disappearance of her scientist aunt and the Doctor sends his robot dog to help. It was the first Doctor Who spin-off and was intended as the pilot for a series that never happened.

She also appeared in the Doctor Who 20th anniversary special The Five Doctors in 1983, which involved all the various incarnations of the Doctor to date, though Richard Hurndall doubled for the first Doctor William Hartnell, who had died by that time.

The original run of Doctor Who ended in 1989, and Sladen continued to work in theatre and appear occasionally on television, playing Dr Pat Hewland in the drama series Peak Practice (1996). However, Doctor Who was relaunched in 2005, and Sladen featured in storylines in 2006 and 2008.

Cashing in on the show's renewed popularity, the BBC first created Torchwood as a spin-off series in 2006, and then set Sarah Jane up with her own series the following year. The character, and the actress, also appeared in The End of Time (2010), the Doctor Who story in which the Doctor "regenerates" from David Tennant to Matt Smith, the present incumbent. She also worked on Doctor Who radio and CD productions, and there were various action-figures of her character.

Sladen is survived by her husband, who also appeared on Doctor Who, provided Dalek voices and was Harry the caretaker on The Sarah Jane Adventures, and by their daughter Sadie Miller, who is also an actress.

GRAPHIC: Sladen with Jon Pertwee in Doctor Who: she later said of her role, "each week it was yes, doctor, no doctor"