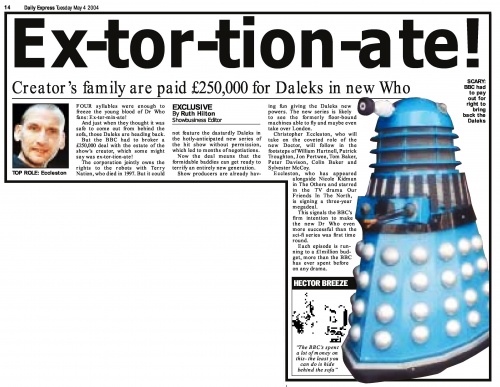 FOUR syllables were enough to freeze the young blood of Dr Who fans: Ex-ter-min-ate!

And just when they thought it was safe to come out from behind the sofa, those Daleks are heading back.

But the BBC had to broker a £250,000 deal with the estate of the show's creator, which some might say was ex-tor-tion-ate!

The corporation jointly owns the rights to the robots with Terry Nation, who died in 1997. But it could not feature the dastardly Daleks in the hotly-anticipated new series of the hit show without permission, which led to months of negotiations.

Now the deal means that the formidable baddies can get ready to terrify an entirely new generation.

Show producers are already having fun giving the Daleks new powers. The new series is likely to see the formerly floor-bound machines able to fly and maybe even take over London.

Christopher Eccleston, who will take on the coveted role of the new Doctor, will follow in the footsteps of William Hartnell, Patrick Troughton, Jon Pertwee, Tom Baker, Peter Davison, Colin Baker and Sylvester McCoy.

Eccleston, who has appeared alongside Nicole Kidman in The Others and starred in the TV drama Our Friends In The North, is signing a three-year megadeal.

This signals the BBC's firm intention to make the new Dr Who even more successful than the sci-fi series was first time round.

Each episode is running to a £lmillion budget, more than the BBC has ever spent before on any drama.

SCARY: BBC had to pay out for right to bring back the Daleks