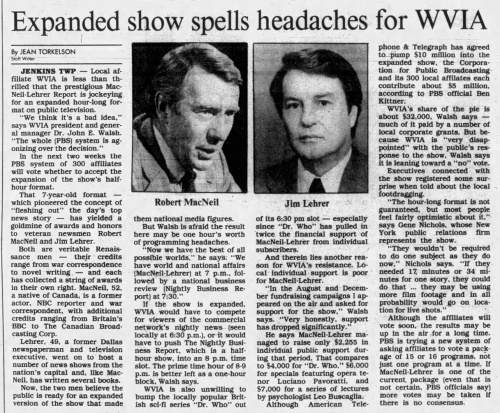 JENKINS TWP — Local affiliate WVIA is less than thrilled that the prestigious MacNeil-Lehrer Report is jockeying for an expanded hour-long format on public television.

"We think it's a bad idea." says WVIA president and general manager Dr. John E. Walsh. "The whole (PBS) system is agonizing over the decision."

In the next two weeks the PBS system of 300 affiliates will vote whether to accept the expansion of the show's half-hour format.

That 7-year-old format — which pioneered the concept of "fleshing out" the day's top news story — has yielded a goldmine of awards and honors to veteran newsmen Robert MacNeil and Jim Lehrer.

Both are veritable Renaissance men — their credits range from war correspondence to novel writing — and each has collected a string of awards in their own right. MacNeil, 52, a native of Canada, is a former actor, NBC reporter and war correspondent, with additional credits ranging from Britain's BBC to The Canadian Broadcasting Corp.

Lehrer, 49, a former Dallas newspaperman and television executive, went on to host a number of news shows from the nation's capital and, like MacNeil, has written several books.

Now, the two men believe the public is ready for an expanded version of the show that made them national media figures.

But Walsh is afraid the result here may be one hour's worth of programming headaches.

"Now we have the best of all possible worlds," he says. "We have world and national affairs (MacNeil-Lehrer) at 7 p.m., followed by a national business review (Nightly Business Report) at 7:30."

If the show is expanded, WVIA would have to compete for viewers of the commercial network's nightly news (seen locally at 6:30 p.m.), or it would have to push The Nightly Business Report, which is a half-hour show, into an 8 p.m. time slot. The prime time hour of 8-9 p.m. is better left as a one-hour block, Walsh says.

WVIA is also unwilling to bump the locally popular British sci-fi series "Dr. Who" out

of its 6:30 pm slot = especially since "Dr. Who" has pulled in twice the financial support of MacNeil-Lehrer from individual subscribers.

And therein lies another reason for WVIA's resistance. Local individual support is poor for MacNeil-Lehrer.

"In the August and December fundraising campaigns I appeared on the air and asked for support for the show," Walsh says. "Very honestly, support has dropped significantly."

He says MacNeil-Lehrer managed to raise only $2,255 in individual public support during that period. That compares to $4,000 for "Dr. Who," $6,000 for specials featuring opera tenor Luciano Pavoratti, and $7.000 for a series of lectures by psychologist Leo Buscaglia.

Although American Tele phone & Telegraph has agreed to-pump $10 million into the expanded show, the Corporation for Public Broadcasting and its 300 local affilates each contribute about $5 million, according to PBS official Ben Kittner.

WVIA's share of the pie is about $32,000, Walsh says —much of it paid by a number of local corporate grants. But because WVIA is "very disappointed" with the public's response to the show, Walsh says it is leaning toward a "no" vote.

Executives connected with the show registered some surprise when told about the local footdragging.

"The hour-long format is not guaranteed, but most people feel fairly optimistic about it," says Gene Nichols, whose New York public relations firm represents the show.

"They wouldn't be required to do one subject as they do now," Nichols says. "If they needed 17 minutes or 34 minutes for one story, they could do that ... they may be using more film footage and in all probability would go on location for live shots."

Although the affiliates will vote soon, the results may be up in the air for a long time. PBS is trying a new system of asking affiliates to vote a package of 15 or 16 programs, not just one program at a time. If MacNeil-Lehrer is one of the current, package (even that is not certain, PBS officials say) more votes may be taken if there is no consensus.