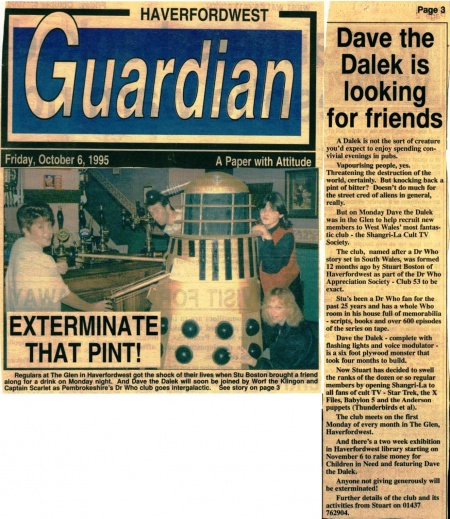 Regulars at The Glen in Haverfordwest got the shock of their lives when Stu Boston brought a friend along for a drink on Monday night. And Dave the Dalek will soon be joined by Worf the Klingon and Captain Scarlet as Pembrokeshire's Dr Who club goes intergalactic. See story on page 3

Dave the Dalek is looking for friends

A Dalek is not the sort of creature you'd expect to enjoy spending convivial evenings in pubs.

Vapourising people, yes. Threatening the destruction of the world, certainly. But knocking back a pint of bitter? Doesn't do much for the street cred of aliens in general, really.

But on Monday Dave the Dalek was in the Glen to help recruit new members to West Wales' most fantastic club - the Shangri-La Cult TV Society.

The club, named after a Dr Who story set in South Wales, was formed 12 months ago by Stuart Boston of Haverfordwest as part of the Dr Who Appreciation Society - Club 53 to be exact.

Stu's been a Dr Who fan for the past 25 years and has a whole Who room in his house full of memorabilia - scripts, books and over 600 episodes of the series on tape.

Dave the Dalek - complete with flashing lights and voice modulator is a six foot plywood monster that took four months to build.

Now Stuart has decided to swell the ranks of the dozen or so regular members by opening Shangri-La to all fans of cult TV - Star Trek, the X Files, Babylon 5 and the Anderson puppets (Thunderbirds et al).

The club meets on the first Monday of every month in The Glen, Haverfordwest.

And there's a two week exhibition in Haverfordwest library starting on November 6 to raise money for Children in Need and featuring Dave the Dalek.

Anyone not giving generously will be exterminated!