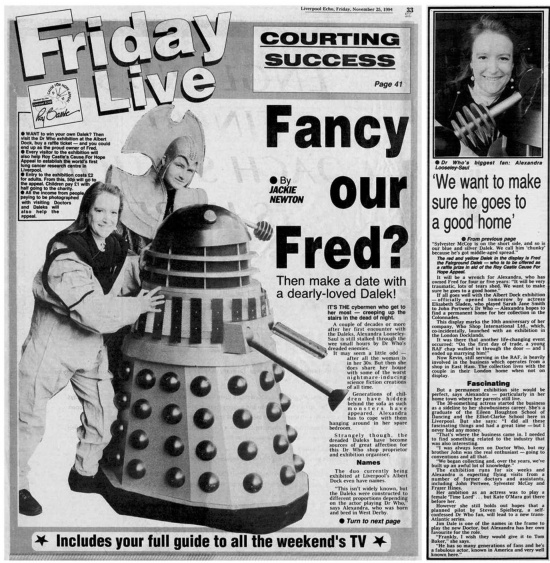 Then make a date with a dearly love its Dalek!

It's the Cybermen who get to her most -- creeping up the stairs in the dead of the night.

A couple of decades or more after her first encounter with the Daleks, Alexandra Looseley-Saul is still stocked through the wee small hours by Dr. Who's dreaded enemies.

It may seem a little odd -- after all the woman is in her 30s. But then she does share her house with some of the worst nightmare-inducing science fiction creations of all time.

Generations of children have hidden behind the sofa as such monsters have appeared. Alexandra has to cope with fans hanging around in her spare bedroom.

Strangely though, the dreaded Daleks have become sources of great affection for this Dr. Who shop proprietor and exhibition organizer.

The duo currently being exhibited at Liverpool's Albert Dock even have names.

"This isn't widely known, but the Daleks were constructed to different proportions depending on the actor playing Dr Who," says Alexandra, who was born and bred in West Derby. Sylvester McCoy is on the short side, and so was on blue and silver dollar. We call him 'chunky' because he's got the middle aged spread."

The red and yellow Dalek in the display is Fred as the fairground Dalek -- who is to be offered as a raffle prize in aid of the Roy Castle Cause For Hope Appeal.

It will be a wrench for Alexandra, has owned Fred for four or five years: "It will be very traumatic, lots of tears shed. We want to make sure he goes to a good home."

If all goes well with the Albert Dr. Exhibition -- officially opens tomorrow by actress Elizabeth Sladen, who played Sarah Jane Smith to John Pertwee is Dr. Who Alexandra hopes to find a permanent home for collection in the Colonnades.

This display marks the 10th anniversary of her company Who Shop International Ltd., which, coincidentally, launched with an exhibition in the London Docklands.

It was there that another life-changing event occurred: "On the first day of trade, a young RAF chap walked in through the door and I ended up marrying him!"

Now Kevin, still serving in the RAF, is heavily involved in the business which operates from a shop in East Hampton. The collection lives with a couple in their London home when not on display.

But a permanent exhibitions site would be perfect, says Alexandra particularly in her hometown where her parents still live.

The 30-something actresses started the business as a sideline to her show business career. She is a graduate of the Eileen Houghton School of Dancing and the Elliot-Clarke School here in Liverpool. But she says: "I did all these fascinating things and had a great time but I never had any money.

"That's where the business came in. If I needed to find something related to the industry that was also interesting.

I was always keen on Dr. Who, but my brother John was the real enthusiast -- going to conventions and all that.

We began collecting and, over the years, we've built up an awful lot of knowledge."

The exhibition runs for six weeks and Alexandra is expecting flying suits from a number of former doctors and assistants, including John Pertwee, Sylvester McCoy and Frazer Hines.

Her ambition as an actress was to play a female 'Time Lord... But a dome I got there before her.

However she still holds out hopes that a planned pilot by Steven Spielberg, a self-confessed Dr Who fan, will lead to a new trans-atlantic series.

Jim Dale is one of the names in the names to play the new Doctor, but Alexandra has her own favourite for the role.

"Frankly, I wish they would give it to Tom Baker," she says.

"He has so many generations of fans and he's a fabulous actor, known in America and very well known here."

Wwant to win your own Dalek? Then visit the Dr Who exhibition at the Albert Dock, buy a raffle ticket -- then you could end up the proud owner Fred.

Every visitor to the exhibition will also help Roy Castle's Cause for Hope Appeal to establish the world's first lung cancer research centre in Liverpool.

Entries to the exhibition costs £2 for adults. From this, 60p will go to the appeal. Children pay £1 with half the going to the charity.

All the income from people trying to be photographed with visiting doctors and Daleks will also help the appeal.