Fans get a closer look at who Dr. Who is 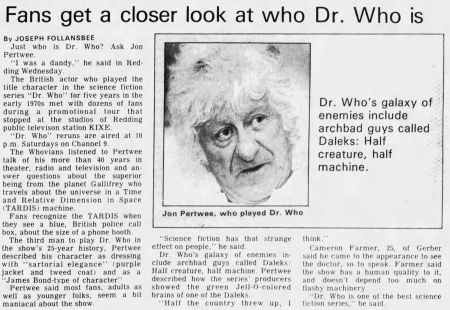 Just who is Dr. Who? Ask Jon Pertwee.

"I was a dandy," he said in Redding Wednesday.

The British actor who played the title character in the science fiction series "Dr. Who" for five years in the early 1970s met with dozens of fans during a promotional tour that stopped at the studios of Redding public televison station KIXE.

The Whovians listened to Pertwee talk of his more than 40 years in theater, radio and television and answer questions about the superior being from the planet Gallifrey who travels about the universe in a Time and Relative Dimension in Space (TARDIS) machine.

Fans recognize the TARDIS when they see a blue, British police call box, about the size of a phone booth.

The third man to play Dr. Who in the show's 25-year history, Pertwee described his character as dressing with "sartorial elegance" (purple jacket and tweed coat) and as a "James Bond-type of character!"

Pertwee said most fans, adults as well as younger folks, seem a bit maniacal about the show.

"Science fiction has that strange effect on people," he said.

Dr. Who's galaxy of enemies include archbad guys called Daleks: Half creature, half machine. Pertwee described how the series' producers showed the green Jell-O-colored brains of one of the Daleks.

"Half the country threw up, I think."

Cameron Farmer, 25, of Gerber said he came to the appearance to see the doctor, so to speak. Farmer said the show has a human quality to it, and doesn't depend too much on flashy machinery.

"Dr. Who is one of the best science fiction series," he said.

Dr. Who's galaxy of enemies include archbad guys called Daleks: Half creature, half machine.