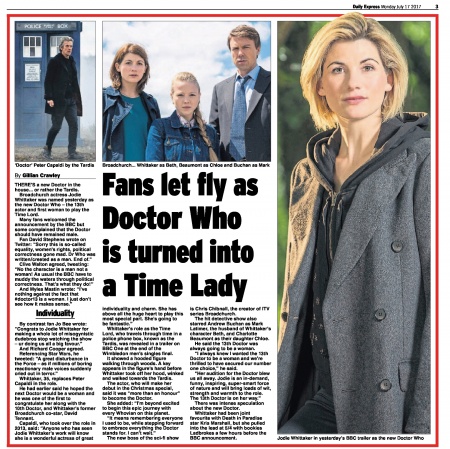 THERE'S a new Doctor in the house... or rather the Tardis.

Broadchurch actress Jodie Whittaker was named yesterday as the new Doctor Who — the 13th actor and first woman to play the Time Lord.

Many fans welcomed the announcement by the BBC but some complained that the Doctor should have remained male.

Fan David Stephens wrote on Twitter: "Sorry this is so-called equality, women's rights, political correctness gone mad. Dr Who was written/created as a man. End of."

Clive Walton agreed, tweeting: "No the character is a man not a woman! As usual the BBC have to muddy the waters through political correctness. That's what they do!"

And Myles Mastin wrote: "I've nothing against the fact that #doctorl3 is a woman. I just don't see how it makes sense."

By contrast fan Jo Bee wrote: "Congrats to Jodie Whittaker for making a whole lot of misogynistic dudebros stop watching the show — ur doing us all a big favour."

Referencing Star Wars, he tweeted: "A great disturbance in the Force — as if millions of boring reactionary male voices suddenly cried out in terror."

He had earlier said he hoped the next Doctor would be a woman and he was one of the first to congratulate her along with the 10th Doctor, and Whittaker's former Broadchurch co-star, David Tennant.

Capaldi, who took over the role in 2013, said: "Anyone who has seen Jodie Whittaker's work will know she is a wonderful actress of great individuality and charm. She has above all the huge heart to play this most special part. She's going to be fantastic."

Whittaker's role as the Time Lord, who travels through time in a police phone box, known as the Tardis, was revealed in a trailer on BBC One at the end of the Wimbledon men's singles final.

It showed a hooded figure walking through woods. A key appears in the figure's hand before Whittaker took off her hood, winked and walked towards the Tardis.

The actor, who will make her debut in the Christmas special, said it was "more than an honour" to become the Doctor.

She added: "I'm beyond excited to begin this epic journey with every Whovian on this planet.

"It means remembering everyone I used to be, while stepping forward to embrace everything the Doctor stands for. I can't wait."

The new boss of the sci-fi show is Chris Chibnall, the creator of ITV series Broadchurch.

He said the 13th Doctor was always going to be a woman.

"I always knew I wanted the 13th Doctor to be a woman and we're thrilled to have secured our number one choice," he said.

"Her audition for the Doctor blew us all away. Jodie is an in-demand, funny, inspiring, super-smart force of nature and will bring loads of wit, strength and warmth to the role. The 13th Doctor is on her way."

There was intense speculation about the new Doctor.

Whittaker had been joint favourite with Death in Paradise star Kris Marshall, but she pulled into the lead at 5/4 with bookies Ladbrokes a few hours before the BBC announcement.

'Doctor' Peter Capaldi by the Tardis

Broadchurch... Whittaker as Beth, Beaumont as Chloe and Buchan as Mark

Jodie Whittaker in yesterday's BBC trailer as the new Doctor Who