Fifth incarnation of BBC's 'Dr. Who' enthralls viewers on both sides of ocean 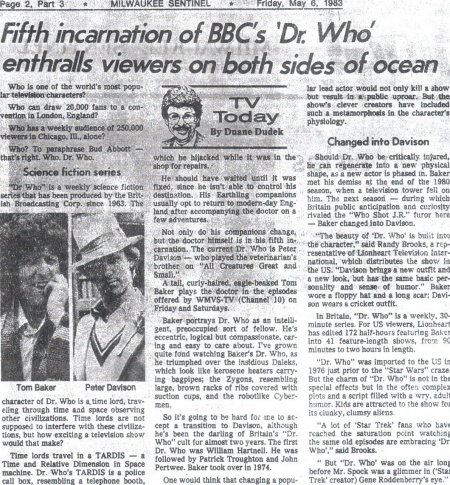 Who is one of the world's most popular television characters?

Who can draw 20,000 fans to a convention in London, England?

Who? To paraphrase Bud Abbott — that's right. Who. Dr. Who.

"Dr Who" is a weekly science fiction series that has been produced by the British Broadcasting Corp. since 1963. The character of Dr. Who is a time lord, traveling through time and space observing other civilizations. Time lords are not supposed to interfere with these civilizations, but how exciting a television show would that make?

Time lords travel in a TARDIS -- a Time and Relative Dimension in Space machine. Dr. Who's TARDIS is a police call box, resembling a telephone booth, which he hijacked shop for repairs.

He should have waited until it was fixed, since he isn't able to control his destination. His Earthling companions usually opt to return to modern-day England after accompanying the doctor on a few adventures.

Not only do his companions change, but the doctor himself is in his fifth incarnation. The current Dr. Who is Peter Davison — who played the veterinarian's brother on "All Creatures Great and Small."

A tail, curly-haired, eagle-beaked Tom Baker plays the doctor in the episodes offered by WMVS-TV (Channel 10) on Friday and Saturdays.

Baker portrays Dr. Who as an intelligent, preoccupied sort of fellow. He's eccentric, logical but compassionate, caring and easy to care about. I've grown quite fond watching Baker's Dr. Who, as he triumphed over the insidious Daleks, which look like kerosene heaters carrying bagpipes; the Zygons, resembling large, brown racks of ribs covered with suction cups, and the robotlike Cybermen.

So it's going to be hard for me to accept a transition to Davison, although he's been the darling of Britain's "Dr. Who" cult for almost two years. The first Dr. Who was William Hartnell. He was followed by Patrick Troughton and John Pertwee. Baker took over In 1974.

One would think that changing a popular lead actor would not only kill a show but result in a public uproar. But the show's clever creators have included such a metamorphosis in the character's physiology.

Should Dr. Who be criticallyy injured, he can regenerate into a new physical shape, as a new actor Is phased in. Baker met his demise at the end of the 1980 season, when a television tower fell on him. The next season -- during which Britain public anticipation and curiosity rivaled the "Who Shot J.R." furor here — Baker changed into Davison.

"The beauty of 'Dr. Who' is built into the character," said Randy Brooks, a representative of Lionheart Television International, which distributes the show in the US. "Davison brings a new outfit and a new look, but has the same basic personality and sense of humor." Baker wore a floppy hat and a long scar; Davison wears a cricket outfit.

In Britain, "Dr. Who" is a weekly, 30-minute series. For US viewers, Lionheart has edited 172 half-hours featuring Baker into 41 feature-length shows, frOrn 9G minutes to two hours in length.

"Dr. Who" was Imported to the US in 1976 just prior to the "Star Wars" craze. But the charm of "Dr. Who" is not in the special effects but in the often complex plots and a script filled with a wry, edull humor. Kids are attracted to the show tot its clunky, clumsy aliens.

"A lot of 'Star Trek' fans who have reached the saturation point watching the same old episodes are embracing 'Dr Who'," said Brooks.

"But 'Dr. Who' was on the air long before Mr. Spock was a glimmer in ('Star Trek' creator) Gene Roddenberry's eye."